First of all - welcome!
Here is the Zauberspiegel. What is it?

This page is for all of our friends and visitors who don't speak German, yet read English, and want to know more about us, the Zauberspiegel.

Have a look around and don't hesitate to ask questions. We'll answer...

What are we doing here?
Nothing improper. The Zauberspiegel is a non-profit multi-media tribute to the "suspense genre" in all its forms.

As an online fanzine this site covers topics on the suspense genre on a primary (in the form of stories, novels and poems) and secondary (articles, columns, reviews) basis. The phrase "suspense genre" is - more or less - a phrase we created to combine various genres. Focusing on horror, fantasy, SF, adventure, crime & thriller or frontiert topics we offer articles on all various forms of these genres, including Heftroman (sort of dime novels), books, audio, movies, games.
Sequels such as Perry Rhodan, John Sinclair, Jerry Cotton and Lassiter are part of our repertoire, as much Tolkien, Robert E. Howard, Henning Mankell, Robert A. Heinlein, Louis Lamour and Rebecca Gable and corresponding TV series (from  Western series like "The Virginian", modern crime series like CSI, he Pretender to Fringe, Star Trek and Hercules) and movies (from the B-horror movies of the 30's to the technical spectacles of the 3rd millennium).
We pulish on a dailly basis, both reviews and articles.
This site is maintained by fans and volunteers during their spare time.
We hope you enjoy your time here, contact with us and the things we are perhaps doing together.

Bettina Meister and Horst von Allwörden (editors)
What Zauberspiegel-online stands for
Literally translated, the word stands for "Magicalmirror-online". Of course we didn't choose this name by random, a few history can be found here. 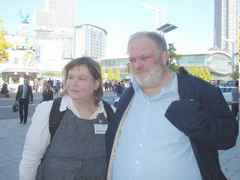 The editors - The co-workers
Bettina Meister and Horst Hermann von Allwörden are the editors of Zauberspiegel-online. We would be literally nothing here without the friends who devote a lot of their time and energy on making the Zauberspiegel possible. So, as editors we say thank you! As we already saied, the Zauberspiegel is made by a bunch of people. If you want to know their names, please read here (at least some of them are their) or press the buttom »Impressum« inthe Main Menu.

Getting into contact with the Zauberspiegel-Team is easy, just write to:

The mission
Calling all plans "a mission" has become a very popular phrase, even though it often covers nothing but the simple fact "why we do what we do".

Whom do we want to reach?
The question can be answered far better by mentioning who is not our audience. If you are only interested in one particular subject, know nothing except your one and only Star Trek universe, Perry Rhodan, or some other very very particular thing, and think nothing else matters in Science Fiction and everything else is bad and inferior, this isn't the right place for you. If you  think nobody else but Tolkien or George Martin matters in Fantasy, Audio is the only media worth talking about or your opinion is the only one relevant, you better should't read our pages. There are excellent pages, boards and printmedias for specialists on virtually every subject, where you will more likely find what you are looking for.
We want to write for those whose interests are more diverse, the  "Allroundfan" who wants to discover new things, dares to be surprised and wants to look beyond his own horizon.
We look for people who are open to more than just a series or genre. These will hopefully have a good time here, enjoy themselves and hopefully come back - as reader, fan or co-worker.
Is Zauberspiegel online something entirely new?
The Zauberspiegel existed since 1982, in those days not as online magazine, though. A brief overview of the history of the magic mirror  can be found here (nker). And since Jürgen "Dan Shocker" was our namesake, learn more about it in As Time Goes By #35 "And the title is ..." (The part of the column on fandomexperiences by editor Horst von Allwörden). Yet it exists as an online fanzine since 2007.
A short overview of the history of the Zauberspiegel

#1 garage flooring 2014-03-12 10:39
Fine way of describing, and fastidious paragraph to take information concerning my presentation subject matter,
which i am going to convey in school.
Kommentarliste aktualisieren