... Linda Stewart on Nick Carter, Sam the cat and her pseudonyms 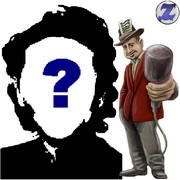 During my inquiries about the series "Nick Carter - Killmaster", I found the author Linda Stewart, who wrote two Carter novels between 1973 und 1975.

After that, I contact Linda Stewart, who quick replied, and came forward to answer some questions. These questions were the basis for the following interview... 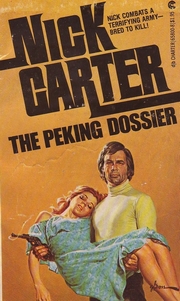 Zauberspiegel: How did you come in contact with Merit and Award books to write your first Nick Carter novel "The Peking Dossier"?
Linda Stewart: Before "Peking" I'd only written lyrics, revue sketches, print & tv  advertising, and magazine journalism. (Pretty much simultaneously.)
Because of the latter,  I was approached by an agent at a major agency. He soon told me that a television drama series was looking for writers. I submitted an original story idea that got bought and for which I then wrote the script.
A few months later, he phoned and said the Carter series was looking for stories and asked if I'd ever written in novel form (I hadn't) or if, at the least, I had read crime and spy novels (yes; all my life and loved them.)
"Okay," he said, "try." What they required as an audition piece was the outline of a story plus 35 pages of its prose. I'd recently read an article about this then-new thing, cloning, and thought it would be a great theme for a thriller (and in fact it was the first to use the idea, beating Ira Levin's "Boys from Brazil" by 3 years).
I then sat down with the great chutzpah of youth and wrote the first 35 pages in 2 days (a feat I've never equalled since, by the way).
My outline read something like "this is the set-up, I don't know what happens after that" which is something you can't get away with any more but could back then.
So yes, "Peking Dossier" (about clones ) was not only my first published novel but my first novel, period. It was sort of a hit (I think it was referred to in an academic article as "the definitive Carter") so I was asked to do the second.

Zauberspiegel: Why didn't you write further Carter novels after "The Jerusalem File"?
Linda Stewart: Why no more? I had a great editor on the first one--meaning she made virtually no changes to the story or the prose-- but then she left the company so the second one --Jerusalem File--was assigned to another editor.
To my horror (I was never consulted and never saw the text again till I saw the published edition) she had clunkily rewritten small chunks of the prose throughout. It was a good story but I thought it was ruined by her flat-footed and unnecessary rewrites. So I refused to work for them again. 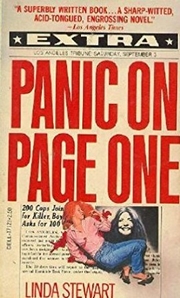 Zauberspiegel: Did you write further spy or crime novels after your last Carter novel?
Linda Stewart: Yes, I wrote many crime novels after that and, like "Payback", wrote mostly as Sam Stewart. I'm currently writing novels under yet another male pseudonym --and, no, I won't say what.
The only crime novel I wrote under my own name was "Panic on Page One", which was nicely reviewed in, among  other places, the New York Times Sunday Book Review.
As for "Payback", it was originally published in hard copy by Simon and Schuster in c. 1987 and was recently reissued as an ebook. You can read what it's about here. 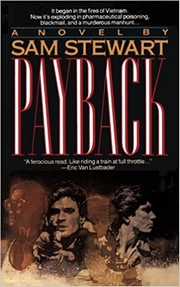 Zauberspiegel: Why did you write "Payback" under the pseudonym Sam Stewart?
Linda Stewart: Why as Sam? Because my adult crime novels are tough, and very early on an editor at Delacorte told me they'd sell better under a man's name.
I agreed. When I, as a reader, saw a crime novel by a woman, I assumed it would be a polite whodunit (and therefore didn't buy it) so I figured that a lot of the women who'd  buy mine would be either disappointed or shocked at the toughness of language and story, and a lot of  men (who'd like it) wouldn't buy it at all.
To a great extent those stereotypes about women crime writers have diminished but I think still remain true to some extent.
Btw, trying to google either my real name or my several (I think it's 4) pseudonyms will lead to confusion in that there are also other writers with all those names  and I'm sometimes credited (or blamed ) for writing things I didn't and alternatively, not given credit for things I did. 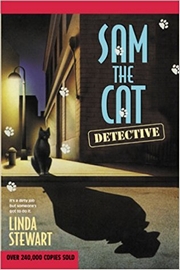 Zauberspiegel: In 1993 your first Sam the cat novel was published. Where did the character Sam come from? Are the novels with sam the cat a kind of tribute of the film noir and the classic detective stories?
Linda Stewart: Among the books I did as Sam was a novelization based on my ex-husband's movie, Jackson County Jail, though oddly my doing it had nothing to do with that connection. We remained lifelong friends and he loved my novel as I loved his script.
Sam the Cat was inspired by my cat, Sam, who I named Sam in honor of my favorite pseudonym. And, yes, the novels, at least stylistically, were a kind of homage to Raymond Chandler. An early review read, "If Philip Marlowe came back as a cat, he'd have come back as Sam." 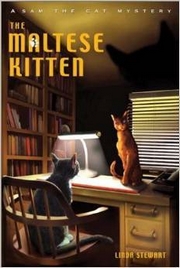 Zauberspiegel: One year later "Sam the Cat Detective" was nominated for the Edgar Award in the category "Best Juvenile". Was it a big surprise for you, that your novel was  nominated for this award?
Linda Stewart: It's always a surprise to be up for an award. A few years later The Maltese Kitten (3rd in the series) was nominated for  an Agatha award....At the moment, I doubt I'll write more Sam's. I started out thinking I'd write one book that took place in each of the four seasons of the year, which the fourth, The Great Catsby (Spring) completed. But then...who knows?

Zauberspiegel: Is it true, that you have also taught writing and literature courses at The School of Visual Arts in New York City, too?
Linda Stewart: Yes, all the bio material is true. (you really did research!) I taught at SVA for about ten years: one course, called "Spies and Eyes", covered from Hammett through Elmore Leonard with the spy stuff going from Graham Greene through Condon and Le Carre.
Also a course in general 20th c American literature-- Fitzgerald through Robert Stone. And a writing course, more aimed at practical nonfiction writing. Turned it into a book under yet another pseudonym. See http://survival-writing.com or look it up at Amazon.
Among the tv documentary series I wrote episides  for were G.I. Diary (CBS) and Spies (A&E cable)

Zauberspiegel: What’s your opinion of the crime genre today? Don’t you think that people’s taste in crime fiction reading has changed quite a lot these days because of the availability of different crime writers?
Linda Stewart: As for current crime fiction, for the most part I don't think it's as good as past crime fiction. The guys like Leonard and Ross Thomas seemed to have been the apex.
Then too, perhaps tastes have changed-- readers (and publishers) putting  less emphasis on prose style and character (things I care about most) , and craving more woman-oriented crime stories, either woman-in-jeopardy or cast as Wonder Woman. Because I remain a romantic, I like to write male heroes, though I always identify with the girl they fall in love with.

Zauberspiegel: Linda, thank you so much for answering my questions.