... Douglas Preston and Lincoln Child about Cruisingships and their suitability for thriller 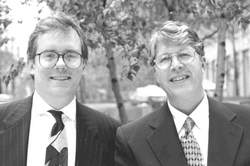 ... Douglas Preston and Childs about Cruisingships and their suitability for thriller

Everybody who likes to read thriller and other literature of the suspense genre is familiar with their name: Douglas Preston and Child. The works of the two Americans comine scientific knowledge with dramatic incidents to create thrilling strands. Thus their (science)thrillers are highlights every single time. Their solobooks (Canyon, Eden Inc.) already gave proof: and Child know perfectly how to drag their readers along with them and to tie them to their stories literally for hours.

Yet, if you want to experience them in top form, you have to read one of the novels they wrote together.

Up to now Peston and Child wrote a total of twelve books together, elven of them are available in German. It's their latest book, The Wheel of Darkness, who is still awaiting its German edition. 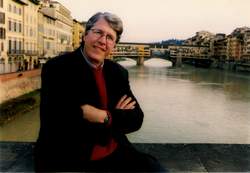 Without a doubt there will be one, after all the thrillers of this duo are all bestsellers here in .

In the course of time these two Americans created a little universe of their own that expands with every new book. Dramatis Personae that have already appeared in earlier published books turn up and find themselves entangled in hair-rising adventures.

Probably the most popular figur of the ones and Child invented is the exceptional and charismatic FBI-Agent Aloysius Pendergast. For all that do not know him yet: Pendergast is an agent whose family comes from and who is specialized on bizzare cases.

An unexplainable series of murder in a museum or corpses that seem to have burnt from within, always the Southerner is always at the scene and solves the riddles with his peculiar ways of investigaing.

His biggest challenge is so far is the socalled Diogenes-trilogy with its three books Burn Case, Dark Secret and Maniac. It's an insane brother who tries to seek revenge for an injustice that happened long ago and is long forgotten. He even threatens friends and fellows of the agent in order to fullfill his desire for revenge. 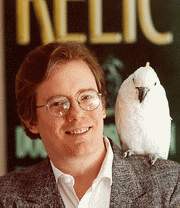 The Diogenes-trilogy is about the best the two authors ever wrote. Never before have their works been so dense, full of tempo and thrilling in its atmosphere.

Every new book dealing with the eccentric FBI-Agent would have great difficulties keeping up with this.

Yet and Child dared this difficult task and presented The Wheel of Darkness, a book with no one other than Aloysius Pendergast as main character.

If you have already read the review on The Wheel of Darkness you already know that the two authors managed to offer a new successful book that can indeed be recommended to every thrillerfan.

Anyhow: It can't have been easy for them to write this book, was it?

About time for the curious fan and Zauberspiegel-staff to ask the authors a few questions. Douglas Preston and Lincoln Child are very busy, all the same they took the time and answer us a few questions.

Thank you very much, to both of you!

But now let's finish the preface and go on with the promised interview. The first five questions were anwered by Lincoln Child, the others were answered by Douglas Preston.

Zauberspiegel: First of all, congratulations on The Wheel of Darkness. It is a great novel and I really enjoyed reading it. Wasn't it very hard to write a new book featuring Agent Pendergast after the impressive Diogenes-trilogy? It couldn't have been easy to find a story that could keep up with tehe events in your former books...
: Childs: It was slightly intimidating to return to Pendergast after the "Diogenes trilogy." So Doug and I decided to take Pendergast out of his element, and the element of the books that had gone before. This gave us essentially a clean canvas and made the job somewhat easier.

Zauberspiegel: Your novels always feature interesting sceneries: a lab in the desert, a hugh oil-tanker, a small village in the middle of nowhere, the underworld of . This time, you choose a cruise ship as  crime scene. How did you get the idea for this?
: Childs: We were both intrigued by the idea of the world's newest, largest, and most opulent luxury liner as a setting for a thriller. Not only would it be interesting to design and populate the fictitious ship, but it would in a sense make for the most extreme "locked door" mystery imaginable--after all, one can't escape from a ship in the middle of the ocean...whether you're the criminal, the investigator, or the intended victim!

Zauberspiegel: How did you prepare to write The Wheel of Darkness? Did you go on a cruise and explored the vessel while traveling? Or did you do something totally different?
: Childs: I have crossed the Atlantic twice on passenger liners (which coincidentally were German), from to and back again, so I have some personal experience with them. The research we did for supertankers in The Ice Limit was also helpful. And the rest we accomplished by more good old-fashioned research: contacting people who worked on or commanded such ships for a living and asking lots of questions

Zauberspiegel: The idea of an image that can mess around with your brain is quite disturbing. Is this something you just made up or is there some scientific research that backs this idea up?
: Childs: A little of both. We try to add elements to our novels that at first seem supernatural but ultimately have a scientific explanation. This aspect of Wheel of Darkness is probably the most extreme example of that in our books to date. In some ways it resembles, but goes beyond, what Diogenes Pendergast attempted to do at the climax of Book of the Dead, our previous novel.

Zauberspiegel: In your novels you frequently include gadgets and events that seem quite fantastic, like the monstrous phantasmagoria in The Book of the Dead. Do you usually try to find a scientific proves for the effects theses apparatuses have, or do you just give your fancy full scope?
: Childs: As I mentioned in the previous answer, we do have some 'apparatus' in our novels that at times comes close to being over the top. We're always looking for exciting new ideas, plot twists, or bizarre predicaments / menaces for our stories and our protagonists, but we do try to rein in our imaginations in the process--if we get too outrageous, it just makes it harder for us to ultimately make it all credible to our readers. 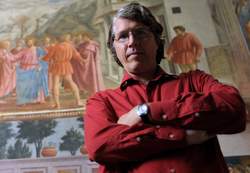 Zauberspiegel: Aloysius Pendergast is the most popular character you have created so far. Although he is quite eccentric,  your readers love him. Do you have any idea why Pendergast is so much more beloved than your less peculiar protagonists, like Will Smithback?
Douglas Preston: Readers love Pendergast because of his eccentricity, not despite it. Pendergast is a man out of time and place, a 19th century gentleman in a 21st century world, but with a cold, hard, and even ruthless edge to him that is unsettling. One reader said he was like a cross between Sherlock Holmes and Hannibal Lecter, without the cannibalism Pendergast is very real to us as a character, more real, in fact, than certain real people we know. We know him very, very well -- and as a result, sometimes he scares us.

Zauberspiegel: In The Wheel of Darkness you don't show a lot of mercy. Many people die, among them even a teenager who is brutally murdered. At the end of the Diogenes-trilogy, on the other hand, everything seems to be fine for the protagonists (except maybe for Constance Greene and Diogenes, of course). That makes me wonder: Have you ever thought of letting one of your main characters getting killed during the gruesome events Pendergast's insane brother caused?
Douglas Preston: All we can say is, wait until you read our next novel, Cemetery Dance, which will be published in the summer of 09. There is no mercy in that novelnone. No character is safe in our novels

Zauberspiegel: Your homepage gives a lot of details about how the two of you write a book together. There is, however, one thing that isn't mentioned which I would like to know nevertheless: When you have got ideas for new plots, how do you decide which ones to use for your solo novels and which ones to use for your joint works?
Douglas Preston: Its often a matter of preference. For example, Linc first offered the idea for Utopia to our partnership, suggesting we write a book together set in a futuristic theme park. The idea just didnt excite meIm not a fan of theme parks in general. Linc did a marvelous job with the idea, but I would not have contributed much to it. On the other hand, the paleontological themes and southwestern desert settings of lay squarely in my own areas of interest, and less in Lincs.

Zauberspiegel: Your novels are quite famous in . Do you have any plans to come here and present some of your books or have a reading, for example at the book fair?
Douglas Preston: We would love to go to and meet our German readers. So far I have toured in , and , and . What a wonderful experience to meet readers in different countries! But of all the European countries, our books are most popular in , so that is our number one foreign language market! Alas, only one of us (Linc) speaks German. (I speak Italian.) We think a visit to would be a most rewarding experience.

Zauberspiegel: Ok, last question (but for a fan one that must not be missing): Can you give me a small hint on what you are planning next? A new Pendergast adventure or something completely different?
Douglas Preston: I alluded to our next book, Cemetery Dance, above. It is set in and hearkens back to the old atmosphere of The Cabinet of Curiosities. It involves a strange set of West Indian practices known as Obeah or Obeye. This may be our most shocking novel to date The reader will not be spared.

More about the authors: 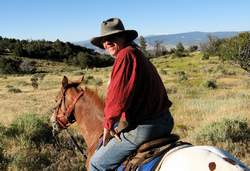 Douglas Preston was born 1956 in , and grew up with his two Brothers in the suburb of . He studies Mathematics, Biology, Chemistry, Physics, Geology, Anthropology and Astrology - and continued with English literature later on.

After his exams he started his career at the of Natural History in that was to become a center stade for many of his novels later on. There he was working as editor and author, as editor in chief later on. In those days he wrote his first textbook "Dinosaurs in the Attic".

In 1986 he moved from to wanting to become professional author. There he published several textbooks. Since the 1990's he wrote several thrillers together with Lincoln Child that became worldwide success.

Douglas Preston also wrote some Books on his own and published articles for wellknown scientific magazines. He does research at the Laboratory of Anthropology in and is PEN-member. He is married and has three children.

Lincoln Child was born in 1957 in , Connecticu. He made his first attempts in writing in elementary school. During his school years, which he partially spent in , he wrote several short stories and two novels. These he keeps closely shut away.

Lincoln Child studied in and finished in English literature. In the same year he began working as a lectorship assistant for 's Press where he became lector in 1984. In the Mid-80's he published several anthologies on american ghost- and horrorstories.

During his research for a book about the of Natural History he and Douglas Preston met. They decided to write a thriller together that should take place in the scenery of the museum.

This marked the beginning of a longlasting friendship and cooperation.

After a short episode as programmer he decided in 1995 to become a fulltimeauthor.

Lincoln Child is married and has one daughter.

More information on the authors and their books can be found on: