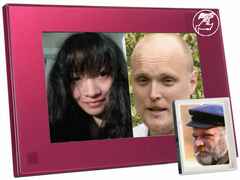 A born Chinese with Finnish passport founded a publishing company in England, und publish German fantasy. That is  an example of globalization. Enough reason to turn to, with some questions to the perpetrators of this project and we asked questions and got answers.

Zauberspiegel: What is Xin publishing? It sounds Chinese. Is there a "parent company"?
Venjin He: Youre right. Xin is totally Chinese. I am originally from South-China and even though I am now a European Union citizen from Finland, I wanted to bring in the values and beauty of Asian culture. Xin means heart in Mandarin Chinese and represents emotions, soul, mind... everything you need to be sincerely passionate about literature.
Xin Publishing is an imprint of Xin He Limited in London.

Zauberspiegel: Now you can't really say the world is one without publishers. What was the general idea to found Xin Publishing?  What are the motives behind Xin?
Venjin He: The world is full of publishers. But the world is also full of restaurants, and still new ones open  success depends on the quality of your food. We have some great dishes, and we didn´t want to give them to the established, big players on the market. The publishing world is about to change big deal, with a huge range of new possibilities, this is the time to add something new.
We are the one with this great Fantasy-world: Isrogant. We are proud providers of what we call Realistic Fantasy. You know, where you find fairies but it is possible for them to have bad teeth. Isrogant is a magical world full of mysteries, but it is also a realistic world that already has passed the Age of Enlightenment. Sword-swingers are existing, but not dominating.
Isrogant is not our only project, but for now the one we focus on. Especially in the English-speaking market, we have many other books going to the market these days. For example, Heero published one of his Martial Arts-books with Xin Publishing. It has been successful in Germany before, now we are going to conquer the UK- and US-market.
But you asked for motives. There are two main things: New authors  and Europe. We want to open the door for young authors, and we want to cross borders. Both is a hard task, since our team is small and we are completely relying on freelance support. But that´s the goal.

Zauberspiegel: What's behind the idea of the London Xin publishing German authors in German?
Heero Miketta: Even though my name has been many times mistaken for Finnish, I am German. It is very simple. When Venjin founded her Publishing company last year, Isrogant was what I could bring. Gerhard and me have been working on it for many years, and I have to admit: I like to see it published this way. Xin Publishing is small, but this way we keep the complete influence on how the world develops.
Were at our best writing in our mother tongue and of course would be happy to have our countrymen and family to be the first to read our books.
And yes, an English translation is scheduled. It´s just a matter of resources.

Zauberspiegel: Now I have a question with several parts on the principles of your publishing company. Xin Publishing publishes books in German from London (not exactly known as the centre of Germany). How does Xin publishing work? Will the books be published in several languages - or different editions? And how are the books translated and by whom? How does printing and proofreading work? How will the books get to the German bookstores?
Venjin He: Europe is growing together, and London is the biggest melting pot in Europe. I think a Chinese-Finnish person publishing German books from England kind of fits very well. Germany has the biggest book market in the continent, and with Gerhard and Heero we have two great German writers. There will soon be more, though. UK has a maximum availability for lingual resources in Europe and can offer us professional freelance translators. Same goes for proofreaders.
Heero Miketta: Things are kept lean, fast, and efficient. We have outsourced most of the physical production such as the actual printing, binding, storage and distribution to local partners in Germany, the UK and the US (and probably in Finland). That gives us the time and space to focus on the actual publishing and the writing of our authors. So far the head of the German speaking parts of Xin Publishing somehow is me. I admit that this is not the best solution for the future, it keeps me away from writing if I work as an editor (Lektor) for Xin Publishing. And of course I can´t do this for my own books.

Zauberspiegel: How will Xin Publishing continue to develop the program? What are the preferred genres? What does Xin want to reach in the future?
Venjin He: Our main genre is Fantasy, followed by general fiction. Isrogant is our main core. We step out these lines from time to time though, as for some Martial Arts and travel books, there also is a children´s book that we couldn´t say no to, because it´s simpley lovely.
Heero Miketta: As for Isrogant: We are working hard for the next books right now. The first reader and the first novel are on the market now, and already readers demand to read the sequels  okay, our own fault for publishing the first part of a trilogy first.
Gerhard works on the Role Playing Game, too. We have a wonderful painter in Lithuania who is currently developing the first Isrogant comic, this will be great! The future looks exciting from here and we have received a lot of signs of interest from many different directions. That is very encouraging. In this very moment I am a bit scared about the huge feedback to our first press releases. There are a LOT of authors out there, with fabulous ideas, and I start being afraid we might disappoint many of them since our resources are not as big as the ones of established major players.

Zauberspiegel: Authors are the capital of a publisher. How does Xin »cast« its authors? What are the criteria they are selected by?
Venjin He: We search for innovation, mixture, excitement and quality. We would like our authors to know what they write about, preferably about things theyve been through themselves. This might sound funny in the association of Fantasy stories, but in the end many situations, characters  they all have to come from somewhere, right?

Zauberspiegel: Does Xin plan for audio books, eBooks or other multimedia editions of its books?
Venjin He: Yes. We have already made a lot of research on the eBook market and this is one example where being international has widened our options. Audio books will have their moment for us, but that is not anytime soon.

Zauberspiegel: Thank You for the q&a? Good Luck!
Venjin He: Thank you very much!
Who are Venjin He, Heero Miketta and Gerhard Ludwig?

Venjin He...
...is a Chinese born Finnish living in England and the founder of Xin Publishing. Venjin graduated from the Finnish Business College and studied languages, literature and arts besides marketing. In the years before founding Xin Publishing, she collected experiences in many different countries, working for an airline, and wrote various stories and longer texts.

Heero Miketta...
...lived in Cologne for many years, worked as a freelance author and communications consultant trainer. Besides that he is a Martial Arts teacher, worked as Violence Prevention trainer for the German Police and founded the well-known ShoShin Projekt. Today he lives and works in Manchester, his main priority is writing: within the last years he published several non-fiction books and is one of the inventors of the Fantasy-world Isrogant.

Gerhard Ludwig,
educator (Diplom-Pädagoge), is a Tai Ji-teacher and lives close to Cologne with his wife and son. In his main job he works with mentally disabled persons. Together with Heero, he developed Isrogant back in the 80s - as a very regional Play by Mail-game first, later accompanied by a Role Playing Game. Gerhard is highly interested in cultural, sociological and historical topics, and this reflects in the deep and well-designed background of his Fantasy world.