The German view on: Harry Harrison 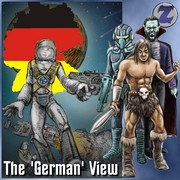 Preambel: We want to look behind the work of some British  SF-writers resp. US-authors, who are known as »milestones« of SF-literature ( or at least »mighty pebbles«).

First I want to speak about Harry Harrison.

Naturally  it's my personal view, nevertheless I want to name the column  »the German view«. 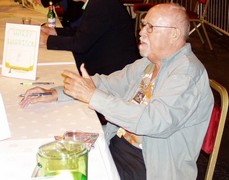 What do I know about Harrys work as a german reader. Mostly I have read his books in german translation, later the english originals. He ist not really one of the great writers who  discuss great problems (especially in one work, which is later discussed) but he is a real tell-tale-writer whose  written adventures  of some characters are entertaining and amusing.

We know of Jimmy deGriz, the „Steelrat“ and his troubles, from  the Sergeant with his  „truble-arm“..., from Deathworld , barbarian world etc which are all  space-adventure-stories very well told.

His best work is „New York 1999“ („Make Room, make Room“) which is the original script for the movie „soylent green“ with Charlton Heston. This is not only a criminal-Story in near (written) future (now in real  its history...) but a social description, if and how social collaboration can or will work, when overcrowding in people will flood over the big cities. Will the charta  of social behaviour conserve its function or will the city and the country be in chaos and only the law of the wolf shall rule?

This book is really his best because for the first time we find a real political statement in it. Superficial the book is only a criminal novel but behind the surface we find the discussion on social behaviour in critical times. So it is a real anti-utopian story which joins itself in the best of this genre.