My 2 Cents on: Robert A. Heinlein

My 2 Cents on:
Robert A. Heinlein

I used to admire Robert A. Heinlein as the best writer in all of science fiction. I still admire him enormously, but after rereading several of his books this year, I became painfully aware of how he stacked the deck and depended on coincidence. Friday is a good example. It's a good read, but it's a flawed book that reveals some of Heinlein's worst habits.

But I also knew Robert as a human being, a colleague, a mentor, a friend, and a man who loved to laugh. 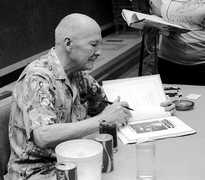 ut the Robert I knew lived inside the bubble of his own celebrity. And eventually, he figured out how to cope with it. He put up a wall to protect his privacy -- not just the twenty foot high electric fence surrounded by a moat filled with rabid crocodiles, but a psychological fence as well. He didn't answer his mail, he had a printed form with check boxes. And his phone number was given to only those he wanted to talk to.

But when he went to cons, he was gracious to everyone -- well, almost everyone. Robert demanded courtesy from the people around him. He demanded a standard of integrity from himself and from those he interacted with.

I will never compare myself with Heinlein, because I still admire him so much, but I have begun to understand why he was so firm about his own rules. First of all, there were many people who wanted to interrogate him, challenge him, confront him, argue with him, correct him, or just suck up the oxygen around him.

That might be flattering if you've never recovered from your Junior High School self-esteem issues -- but if you're honestly interested in the adventure of humanity and the thrills of discovery that science makes possible, then that kind of attention is worse than useless, it's annoying. It uses up time that would be better spent peering through telescopes or seducing redheads. For a working writer, that's a slow kind of soul death, like being gummed by tribbles.

I've said more than once that I'm not interested in an argument. And there are two reasons. The first is that I'm not interested in an argument. It's annoying. There's only one of me, but apparently there are several hundred people who follow my posts and who want to argue with me. It's time consuming. It's annoying. It sucks the oxygen out of the room. And while some people might like the idea of having an argument with some famous author, the famous author is exhausted. Maybe not by the first argument or even the third, but certainly by the thirtieth. Any author can tell you this -- I hate having the same conversation over and over and over. Especially with people who aren't interested in listening, only arguing.

But the second reason I don't like arguments is that too often, I end up feeling insulted. 90% of what I do is research. (The other 10% is lying awake nights planning revenge.) When I post something here, it isn't just a casual observation -- it's usually the final percolation of months of consideration. I'll have prowled the dark corners of the web as well as the brighter locii. I'll have read both sides. I'll have taken the time and made the effort to examine the logic (or lack of) on both sides (or more) of the issue. I'll be looking for the human side, the humane side, the compassionate side because that's who I am. I'm looking for the compelling evidence that makes the case. So eventually, when I finally post what I'm thinking, it's a distillation of those conclusions.

So when someone comes along and reads my post and immediately starts typing -- without having done the same research, working on the assumption that I need to be educated on the issue -- yes, I feel insulted. I feel insulted by the assertion that his ignorance is equal to my research.

Robert once said to me, "We can't have this conversation because you don't know what you're talking about." He was right. I hadn't done my research. Now I was willing to listen and be educated, but Robert wasn't obligated to teach me. He pointed me toward the source material and told me to go educate myself. That's a lesson that struck home.

I am not "the famous author." I'm a working stiff. I tell stories. Like Robert, I'm competing for your beer money. If you like what I write, that's nice for both of us. If you don't, that's okay too. But Bob Dylan said it best, "Just because you like my stuff doesn't mean I owe you anything." I don't.

What you owe me -- and every other human being on the planet -- is respect. Courtesy. Dignity. Grace.

But if Robert was a role model for me as an author -- yes, he was -- then he was also a role model for me as a human being caught in the limelight. (Limelight contains kryptonite.) Like Robert, or any other author who has earned an audience, I have discovered the necessity of holding the audience at a careful distance -- not because I do not like the audience, but because I do not like those who presume an invitation to argue.

When I say I'm not interested, I mean it. There's no payoff for me. I'd rather play "show me the belly" with the terrier. That's more fun, more rewarding, and gets my ears and nose washed.

Now I gotta go. One of the alligators in the moat is choking on one of the neighbor's kids and I've gotta go do a Hamlisch maneuver. (That's where I run to the piano and do three choruses of "What I Did For Love.")