My 2 Cents on: A Roddenberry Announcement

My 2 Cents on:
A Roddenberry Announcement

Back in 1986, Gene Roddenberry made a promise in front of 3000 Star Trek fans that it was time to include a gay crewmember on the Enterprise, I was there.

He repeated that promise early in 1987 to the staff of Star Trek: The Next Generation, even bawling out one person who made a joke about it. Roddenberry understood that "liberty and justice for all" actually means ALL. And he could do a great rant about the evils that have been done in the name of religion. 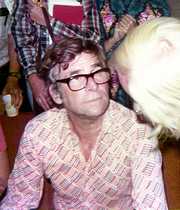 My "Blood And Fire" script never made it into production for reasons to complex to list here, but had a lot to do with the homophobia of one or two people in a position to throw monkey wrenches into the works.

Twenty years after that script was written, James Cawley and the fantastic team of volunteers at Star Trek: Phase II produced "Blood And Fire" as a wonderful two-part episode. I co-wrote the shooting script and directed it. We had to shoot 80 pages in ten days, so some scenes were rushed, but the story was well-written, competently acted throughout, methodically edited, brilliantly mounted and produced, and ended up looking at least as good as any of the episodes of the original series. It ain't as perfect as I wanted it to be -- and I still dream of the chance to do a proper edit on it -- but I'm proud of what all of us accomplished. At least a hundred and fifty people worked their butts off to make it happen.

The point of the episode was to write about the fear of AIDS -- and it was appropriate to include a same-sex love story in the script. In fact, in keeping with Star Trek's original mission to deal with important issues, it was NECESSARY to include that gay couple.

Throughout the entire process of production, we had some fans questioning whether or not it was right to do a gay story on Star Trek. Speaking as one who knew Gene's intentions for the series, who has some claim to understand that Star Trek is about questioning everything -- yes, it was not only right, but important, to put the gay characters in. Recognizing their relationship is important to Kirk recognizing the strength of his own relationship with his ship, his crew, Spock, and his nephew.

Now, some little pisher has taken the Star Trek:Phase II production of "Blood And Fire," edited out all that messy gay stuff because, in his (paraphrased) words, homosexuality is a mental illness and won't exist in the future. He has not only bowdlerized the original episode, he has destroyed the intention of the entire story, reducing it to a rather drab action story that now lacks its emotional core.

He has been asked politely to take it down because he has no right to use any of Phase II's material. Instead, he has threatened: "If you manage to get it pulled I will just post it again and again and again until it is left alone. I'm going to have fun with this one. "

He justifies himself by claiming that Roddenberry was a religious man and Star Trek was a religious vision. No -- not really. Gene could do a great rant about the evils that human beings do in the name of religion.

Yes, I'm a gay man. Yes, I wrote a gay love story. Out of some 700 filmed episodes of five different TV series, at least one story should acknowledge the existence of Star Trek's millions of LGBT fans. I post this information here not as an angry screed, but simply as an example of how hard some people will work and to what lengths they will go to make LGBT people invisible.

Sorry. Closets are for clothes. Fabulous fabulous clothes. And the occasional republican skeleton.

We're here, we're queer, and yes -- we are part of Star Trek. We are writers, actors, directors, costumers, and crewmembers both in front of the camera and behind the camera. And those who can't deal with it are the ones who have truly failed to understand the vision that Star Trek represents -- a future that works for everyone, with no one and nothing left out. And that means respect for the diversity of the human soul.