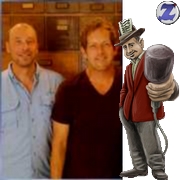 The Pretender war a very fascinating series, shot between 1996 and 2000. Then, after only four seasons and two movies it - unfortunately - vanished. Now, after more than a decade it returns.

This was so exiting that it made us contact Steven Long Mitchell & Craig W. Van Sickle, asking for an interview with us.

The History
Zauberspiegel: How did the idea of creating the series PRETENDER come up? Did you develop the series with the concept of the two levels of narration in mind (i.e. Centre vs. Jarod and Jarod helping people in need)?
Steven Long Mitchell: We had always wanted to tell a story about a person who could be anyone he wanted to be.   It seemed like such a wonderful dream.
Craig W. Van Sickle:  Yes, we always wanted to have two level of narration so we could delve deeper into the back story of the man who was finally free.

Zauberspiegel: What criterias did you choose the actors of the series by? Were there other candidates besides Michael T. Weiss and Andrea Parker who were on your shortlist
Steven Long Mitchell:  Michael was our first and only choice – tP would not have been the same without him or Andrea Parker.
Craig W. Van Sickle:  Andrea blew us away the second she walked into casting and we knew she was everything we’d dreamed Miss Parker could be and so much more.

Zauberspiegel: What were the reasons for your final decision to choose Michael T. Weiss and Andrea Parker for the leading characters in the series PRETENDER?
Steven Long Mitchell:  They were the characters – it wouldn’t have worked without them

Zauberspiegel: And what made you decide on Patrick Bauchau?
Craig W. Van Sickle: We wanted an international cast and we are big fans of Patrick.  So happy he agreed to bring Syndey to life for us.

Zauberspiegel: And this leads to the question how and when you decided to extend the part of Jon Gries (as Broots)? Craig W. Van Sickle: After all Broots became a popular character, a (hidden) object of affection in the series.
Steven Long Mitchell: We wanted a character tat would be fun for Miss Parker to play off of. Jon Gries was a fabulous choice for Broots and he always stole the show.  He’s a wonderful actor and an even better human being.

Zauberspiegel: Michael T. Weiss succeded in making Jarod look like a big curious child, discovering things of every-day life like softice, Bubble Gum or PEZ. Was it his initial idea to do that? Did the actors have a chance to add own ideas to the story during the run of the seasons? Including the further developments of Jarod, Miss Parker or Sidney? How free were there screenwriters to bring ideas of their own?
Steven Long Mitchell:  tP was a creative family and EVERYONE contributed greatly to its success.

Zauberspiegel: How did the crossover to the series PROFILER happen? And how close was the cooperation or exchange between the particular creatives of the series?
Craig W. Van Sickle:  It was NBC’s idea and a natural one.  We had done these before and enjoyed working with the other creatives.

Zauberspiegel: George Lazenby, former Bond-actor, appeared in a few cameo appearences in the series, playing the father of Jarod. Seen from today's view on things, wouldn't it have been an intersting idea to install Lazenby as a 'new' recurring charakter in the PRETENDER series and offer new impulse and more insights to the history of the characters?
Steven Long Mitchell:   You never know what might happen.

Zauberspiegel: The series was terminated after 'only' four seasons. What were the reasons for that? Did you run out of ideas for another season of the PRETENDER?
Steven Long Mitchell:  No we have years of Pretender stories left to tell.
Craig W. Van Sickle:  And we are about to start telling them in more ways then one.

Zauberspiegel: 2001 two PRETENDER-movies were made for TV. What was the purpose for the movies? Were they only meant to solve some secrets and riddles that remained from the TV-Series?
Steven Long Mitchell:  No they were intended to keep the story going.
Craig W. Van Sickle:  And since they didn’t allow us to do that – we have finally come up a way to do it ourselves.

Zauberspiegel: During the four seasons one couldn't sometimes help but wondering if Jarod wasn't a prey of Miss Parker in more than one way. Thus to say, there were indications for a sexual tension between the two of them. Was this done on purpose or was this rather a misinterpretation by the fan?
Steven Long Mitchell:  Miss Parker and Jarod are connected in more ways than just one.
Craig W. Van Sickle:  We will find out more as their story continues. 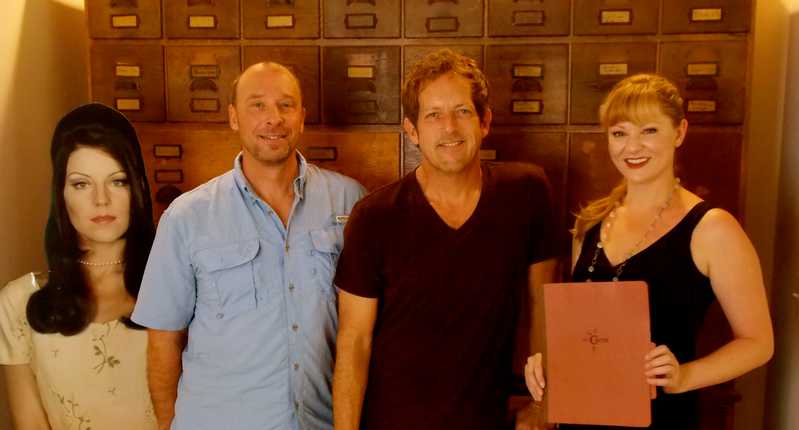 The Future
Zauberspiegel: The PRETENDER returns - after more than a decade ...
... how (as a series? movie)?  You will find out July 19th
... when (will it be aired? When will the shooting begin)? You will find out July 19th
Steven Long Mitchell & Craig W. Van Sickle: Our Pretender Mission Statement ...
In the tale of The Pretender, Young Jarod was taken against his will and held away from the world by forces larger then he was. Yet during his captivity he never gave up hope that his fate would be freedom one day - to return to the world to continue the amazing journey we call life.
The story here is very similar. A little over a decade ago, forces larger than tP and for reasons that really don’t matter, made a decision that kept the saga of tP locked away from the world – just like Jarod was.
We know loyal fans were disappointed and yes, so were we. There was so much more to tP that all of you wanted to know and that we wanted to explore.
But there is good news.
Just like Jarod who, after decades of confinement, finally escaped The Centre and ran away to be free. Well now, so has the tP itself. After being locked away for so many years, tP is finally free to return to the world and continue life’s adventure.
As fate would have it, we have regained the rights to give tP the Rebirth it deserves. We can now reinvigorate tP for as long as you want - and no one can ever lock it or Jarod away again.
After thinking long and hard about the best way to bring the tP back, we’ve come up with several different ways to reawaken our much-loved saga for both faithful fans and new fans alike.
First, tP will be reborn as a series of novels enabling us to delve much deeper into the characters’ hearts, minds, souls and lives in a more revealing way that the limitations of a weekly TV series could never allow for.
Second, we’ll add graphic novels to the mix, fleshing out even more provocative details of the early years of Jarod, Miss P, The Centre and much more, leading to…
Third, be it cable/broadcast TV, a Netflix model series and/or a series of Pretender feature films - tP will then be taken to a whole new level with familiar faces and new characters as well.
You have always been loyal to tP and we want you to know that we’ll always be loyal to you.
The Pretender has found freedom – and an amazing journey into life is about to begin again!
The Rebirth of The Pretender will blow your mind.

Zauberspiegel: What actors of the original cast will join in? And, after the death of Harve Presnell, what will happen to the character of Mister Parker?
Steven Long Mitchell:  The Pretender wouldn’t be the same without the actors who made it so popular.
Craig W. Van Sickle: When tP is reborn on film we will have tons of surprises for them and for the fans.

Zauberspiegel: In 'Reality' more than a decade has passed. How will you deal with this gap in the reality of the series?
Steven Long Mitchell: In ways that will make you smile -

Zauberspiegel: Without revealing to much, can you give us a little insight on what we can look forward to in the continuation of the series? Will it also take place on two levels or will it concentrate on the fight between the Centre and Jarod only?
Steven Long Mitchell:  It will be The Pretender you know --
Craig W. Van Sickle: And tP you never expected

Zauberspiegel: How much impact did fangroups such as the „Miss Parkers Yahoo-Groupe – FrustratedTpFan“ and their never ending work to continue the series have on the return of the PRETENDER? How important are, all in all, fans really? Are they one argument for the importance of certain series or are they only padding?
Steven Long Mitchell: We love to entertain - been doing it our whole lives – and for the past 30 years have made our passion, our career path.
Nothing we have done has reflected that passion more than The Pretender.  That the fan groups share equal passion make us all the same.
Craig W. Van Sickle:  The fans are the most important thing there is.  They have always been loyal to The Pretender and we will always be loyal to them.

Zauberspiegel: Today series on channels such as HBO receive high praises for quality and entertainment, some say even better and more than the cinema movies. What do you think about that? If you agree, why is that so? And if you don't, what is the advantage of the cinema compared to TV-Series?
Steven Long Mitchell:  Cable allows for a more in depth character analysis that we find liberating.
Craig W. Van Sickle:  But there are many ways now – many other platforms to enhance the experience we used to think we could only get from tv.

Zauberspiegel: Thank for the q&a and good luck for the return of The Pretender. May it live long and prosper (... oops ... wrong franchise)
Steven Long Mitchell: the Rebirth of the Pretender will take many forms starting soon.