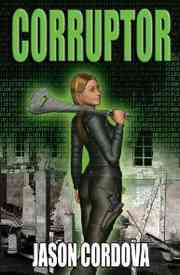 Corruptor
by Jason Cordova
"Corruptor" by Jason Cordova is a mystery/thriller set in an interactive virtual reality construct.  The most popular, multi-player game system on earth is compromised while several hundred people around the world are connected to the game by VR headsets, thus rendering them the largest group of hostages in history.  The hackers/blackmailers set it up so that if anyone tries to take off a player's game gear before the blackmailers get what they want, the player dies instead of just waking up to reality as usual.

Jason Cordova has created a virtual reality game with such specificity that readers may, at first, not realize the characters they encounter are actually mentally interacting in a shared, VR universal world game.  Time is a major factor because, while in the game world, players sit immobile, unable to eat or drink.

The action moves back and forth between the game, as players realize they cannot log out voluntarily, and the game company, desperately searching for the hackers as time is running out on the gamer/hostages.  One thing the hackers do not know is there is a secret "weapon" in the game on the side of the company; communication between the VR world and reality is difficult, but not as impossible as the blackmailers think.  Gradually, the gamers realize something is wrong and begin to work together to try and help the company from inside the game.

"Corruptor" is very well-paced and makes the reader anxious to turn the page to see what happens next.  The virtual reality gaming world may not exist in this form yet, but I would not be surprised if the final product comes very close to Jason Cordova's concept, including specific gaming rules and perceived interactions between players.

I high recommend this book to gamers and hard sci-fi fans especially, as it is a very polished, believable look at the world of gaming and the technology that will be required to cause interactive VR games and simulators to exist.