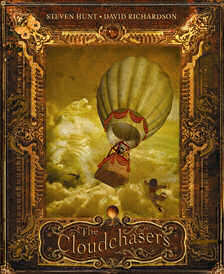 One look at the cover and you get a glimpse of what the general idea of the book is about: Steampunk. Yeah!
The simple coverdesign (Steven Hunt) made me so exited and eager to get this book, that I was more than happy when ABC books offered us a copy.

The cover, and many illustrations inside the book, are simple eye-candy.

The story itself deals with a subject often arising in steampunk: An alternate world with steamengines on cars (?), ship travelling through the air and a society where men are not much more than slaves.

In this world it's the Banker who rules not only Bankertown, but also the hearts and minds of the people who live there.

Alice, the main character of The Cloudchasers, is a young girl that doesn't fit. She doesn't fit into the scheme of Bankertown where youngsters are being educated to follow the guidelines of the ... She dares to show imagination, see monsters emerging from the clouds and lets her mind wonder - strictly forbidden in this world. She is unable to hide this from the outer world and being threatened with reeducation in the "Institution", a home where "such children" go.

How huge the threat is she and the power of her imagination means to the Banker can only be imagined, because for some reason this powerful man can't simply let her go, but send his most powerful and vicious soldier after her: The Catcher.

Together with the traitor Spinner and Alice's brother Thomas, a devoted Captain of the Youthorganisation of the Banker called "Banker Youth", she escapes only by a hairbreadth in a captive balloon. This balloon carries them to a strange place where animalmonsters made of stone suddenly become real where they meet an even stranger old man. From this man Alice hears that they have arrived in the "Land of Imagination". Finding a way back home? What will they do?

The story of "The Cloudchasers" contains everything that I like about steampunk and that make me so interested in it: The world of the Banker is in many things similar to our own one, supernatural aspects that make a change, adventure and a captive balloon.

Trying to find out what makes the difference, I found that dissatisfaction comes up mainly when the pages contain illustrations of people. The faces are mask-like and the limbs appear unnatural as well. This is very sad since there is a great focus on people, such as the old man, the figure called "Trader Jack" or "The Catcher". While one can live with an unnatural look in the faces of the children (it seemed to me that I am more willing to accepta sleek face on the children), the older the person gets, the unnatural the faces appear. This takes away a lot of the joy of the book.

Yet, really wonderful to look at, are all the scenery-illustrations and especially the double-sided cloudsecenes. Showing some of them here doesn't make sense, because one would have to downscale them far too much.

So I was trying to check the website advertised in the book: www.thecloudchasers.com ... yet it was impossible to access the site. What a pity.

All in all The Cloudchasers is a special book, not totally convincing in its illustration, yet something worth to look at!