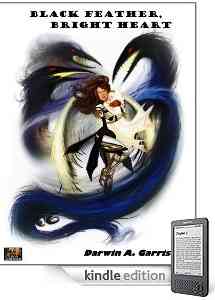 Black Feather, Bright Heart
by Darwin Garrison
This is a very well-constructed, moving short story that carries the reader from a bucolic reality to the truly terrifying world of the fae and back again.

Mirram has returned to her original human form after walking the Glimmering Path to revenge the slaughter of her entire family when she was just a child. She had become weary of revenge and wished to live a simple, human life as a baker and healer, giving up the terrible powers as the fae Lady Nightwing, releasing her hold on the crows and ravens that answered her will. But Lady Nightwing's brother and sister fae wish her to return to their realm and send their minions against her village to force her to step back on the Glimmering Path and take up her sword again.

She called on the forces of the All-Father to help her save an infant stolen from its mother's arms by an imp controlled by her fae siblings and found herself embroiled in a terrible battle, even though she had long given up the violence of life with the fae. She experiences the terrible loss of two of her siblings during the battle and chooses to stop before all her fae relations are dead by her hand - something she never wished.

She is given the opportunity to change her life to something different, but chooses to return to her role as a human healer and see if she can be loved as she is, by a human man who has come to love her.

This story is both dark and lovely at the same time and I highly recommend it to anyone who enjoys reading fantasy. The portrayal of the fae in this story is very much darker than many stories, but far more "realistic" than most. I truly enjoyed this story.

#1 Fiction Fan 2011-07-12 10:24
I'm delighted to see that are still stories worth reading. This is definitely one.
Kommentarliste aktualisieren