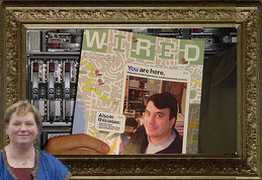 The future and upcoming most important holiday. What's a company today without system administrator? And in many households there are technical devices that weren't available to the NASA for the lunar landing forty years ago. Thus it is only a matter of time until we have aSysadmin for households with his service being included in the rent.

We had an interview with Ted, initiator of the Sysadmin Appreciation Day, ...

Zauberspiegel: Ted, thanks for taking the time to answer a few questions to us. I suppose most of us and our readers who use the computer on a more or less regular basis know what a sysadmin is. Yet ... what is a sysadmin?
Ted:  Most businesses, once they reach a certain size, have an employee who is responsible for the technology of the company.  That person soon becomes the "SysAdmin".  Responsible for computers, networking, web sites, email servers, security, printers, telephones, cell phones, fax machines, copiers, etc.  As the company grows larger, then there will be a team of "SysAdmins".

Zauberspiegel: This means the sysadmin is the person you usually scream at, swear at and curse in your office, when the computer surrounding is breaking down - while the sysadmin on the other hand is sitting in a mess  of used tiles and computercable, ruffeled haired, wondering why we PEBKACs in our chairs are still able to breath without the sysadmin telling them what to do?
Ted: Well, I guess it depends on the environment.  I believe in teaching.  I try my best to help users.  Sometimes people are under pressure, and when their technology fails, they take it out of the SysAdmin.   We know that this is unfair.  But, I still try to do my best.

Zauberspiegel: Yet, why did you see the necessity to promote the sysadmins by devoting a special day for them. Do they belong to a neglected species?
Ted:  The "SysAdmin" is a unique part of the company.  We are the second most important person, second after the receptionist.   Why not have a Cake and Ice cream party?

Zauberspiegel: How did the idea of a sysadminday get started? How do you promote it and how many people do respond to your activities?
Ted:  10 year ago, I had just purchased and installed several new HP laserJet 4000 series printers.  Shortly after, I saw a clever magazine ad for HP LJ 4000 printers.  In the ad, the "SysAdmin" geek-type guy was getting presented with baskets of fruit, flowers, and other gifts.  In the view of the people is a new HP LaserJet 4000 printer.    In the ad copy, were words stating that your co-workers will love you if you get new HP printers for your office.    I was sitting with my co-workers in the lunch room, and I showed them the magazine ad.  I asked "where is my basket of fruit?".  That day I thought of the idea of "System Administrator Appreciation Day". I registered the domain-name for "SysAdminDay.com", and create the first version of the website.     I sent email message to my friends, and sent them the URL for the new website.

Zauberspiegel: One usually gets the feeling that a sysadmin is mostly burried (see above) under hardware stuff, a coffee stained coffee cup to his right, a well-filled ashtray to his left, boxes of pizza deliveries behind his chair, life consisting mainly of computer stuff. What is reality like? Is there a "typical" sysadmin?
Ted: We are normal humans, just like you.  We have hopes and dreams, just like you.  I don't know about "Typical", but the best SysAdmins are lovers of technology.  And that makes us also a "nerd" or a "geek".  We love to explore and learn about anything new.

Zauberspiegel: To be honest, I think the SysAdminDay is a great idea, and being highly addicted to computers myself, I really appreciate the help of sysadmins both at work and in private, yet I can`t help but grinning a bit at the idea of a sysadminday. I assume this happens pretty often.
Ted:  Yes, we are very, very serious about SysAdminDay, (but It's all about the Cake and Ice cream party).

Zauberspiegel: So, I haven't asked so far who you are. You are mentioned as a major contact for the SysAdminDay - are you THE sysadmin of sysadmins?
Ted:   I am not "THE sysadmin of sysadmins".  We all have our specialities and skills. Everyday, I work with many great SysAdmins and System Engineers-- that know more than I do.   I am the founder of SysAdminDay. There are many volunteers which have helped to promote the holiday.

Zauberspiegel: We had the idea of writing a story about the Sysadmin appreciation day in the year 2099 - what do you think, what will the computerworld be like in 2099?
Ted: Somehow, I suspect it will be "The Matrix".

Zauberspiegel: And what do you expect the sysadminday to be by then?
Ted:  ...

Zauberspiegel: As you know, we write about all various kinds of suspense, including Science-fiction, history, fantasy, etc. Are you interested in any of these genres? And if so - what is it? What kinds of media do you prefer?
Ted:  At a early age, I discovered Science-Fiction.  Space travel, time travel, etc. When I was a teen, I watched (and memorized) every episode of Star Trek (the original series).  I did not have a VCR, so I recorded the audio on Cassette tape.  In high school, I was already into electronics and computers.  I had "TREK80" game on my SOL20 Computer. ( http://en.wikipedia.org/wiki/Sol-20 and  http://www.sol20.org/programs.html   )  After school,  I hung-out at a Computer Store.  A group of my high school friends saw Star Wars (New Hope) together.   I guess my media is movies and television.  Today, I am re-watching "LOST" series from the first episode.   I am just finishing the 2nd season.

There are many good pictures here -->   http://www.flickr.com/photos/sysadminday/