... Joshua Mowll on the Guild of Specialists, universes, and age bands 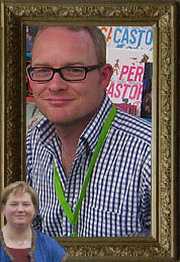 ... Joshua Mowll on the Guild of Specialists, universes, and age bands

Who will ever dare to say books were boring! In Germany Dressler is has the publisher who has succeeded in securing the rights for publishing the glorious trilogy of the Guild of Specialists by Joshua Mowll for the German-language market: Following first two volumes of "Operation Red Jericho" and the 2nd volume "Operation Typhoon", the third volume titled "Operation Storm City" is already available in England for some time, having been published in England in autumn 2008.

Originally coming from graphic design, Joshua Mowll was working as an illustrator for various newspapers, especially for the "Mail on Sunday". His ingenious idea of the "Guild Trilogy" won several awards, including an award for innovative children's books in 2006.

Zauberspiegel: Hello Joshua Mowll, thank you very much for taking the time to answer us a few questions on the Honourable Guild of Specialists, your books and your work as an author. I assume,  without having read the end of the trilogy, that the enemies of the Guild are still out there somewhere - why have you chosen to reveal so many of the secrets of the Guild just now?
J. Mowll: It was time to share some of those ancient secrets with the world. Now seemed like an excellent moment to do it.

Zauberspiegel: Have you taken certain precautions now that you are the keeper of secrets?
J. Mowll: I lock all my doors and windows at night.

Zauberspiegel: Do you know of current plans of the enemies of the Guild to try and get to power?
J. Mowll: I don't. They are a terrifying and clever gang, so who knows? I did wonder if they might be behind some of the recent banking collapses in the UK.

Zauberspiegel: Of course the whole story of the Guild is fictional *scared looks* - at least I hope they are. What was the initial idea when you began making plans on the books?
J. Mowll: I first thought of the idea for Operation Red Jericho back in 2001, as I was walking across Dartmoor, best known as the eerie location for Conan Doyle's 'The Hound of the Baskervilles.' I didn't see any luminous dogs, but I was struck by an idea for a novel which would combine adventure with sophisticated illustrations, photographs, side notes and appendices. At the same time, I visualized supporting material packed with a dazzling complexity of detail. It seemed obvious, but I couldn't think of an author who had ever tried to combine these two concepts. I knew that I could create the illustrations without too much trouble as I work as a graphic artist for a national newspaper - but the storytelling would be new and uncharted territory for me.  I had one other idea which very quickly became a mantra: it had to be the sort of book that I would have wanted to read when I was young. 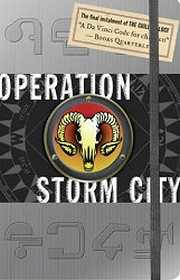 Zauberspiegel: In Germany Vol 1 and 2 are already on the market, Vol 3 will follow. When you started working on the books, did you have a 3-volume-series in mind?
J. Mowll: Yes, absolutely. I had to plot the novels through because it is really one big story divided into three. I had a very good idea of the final scenes when I began, although the detail naturally evolved as I wrote. The story grew and developed on the original plot structure, but writing a trilogy is a bit like playing a game of three dimensional chess - one small change can have huge repercussions later in the story.

Zauberspiegel: You chose the time-period between WW1 and 2 for your books. This is, at least in Germany, not necessarily a very popular period. What made you choose this time? Pretty often it reminded me of Steampunk which would have made the creational process of the inventions easier, I assume.
J. Mowll: I love the 1920's because I think the aircraft, cars and clothes have never looked better, and the feel of the 'Art Deco' age somehow lends itself to good honest adventuring. Remote parts of the world still remained unexplored, and I needed an era where such a big plot could be set. Asia in the 1920s had got all of that. Steampunk wasn't a huge influence on me, although the parallels have often been drawn by others. As I worked on the illustration I began to create my own visual language; When I needed to invent a huge tunnelling machine, I sat down and designed it.  If it has a Steampunk 'feel', it is more through coincidence than anything else.

Zauberspiegel: What I found most appealing about your books is the fact of entering into a detailed world, filled with information, facts and background stories. This made me jump to the computer right in the middle of Vol 1, trying to verify the information I found there. To my huge surprise, it seems 90% of the whole plot was pure fictional, including islands etc. Why did you decide to nearly create a "universe of its own"?
J. Mowll: Some of the background material is real, some is not. I like to tread that fine line between fact and fiction. As you discovered, it intrigues the reader, drawing them in and making them wonder what's real. One of my aims with the book was to create lots of technically difficult visual material - diagrams and photographs - which looked as authentic as possible. No author, to my knowledge, has ever tried to do this in fiction.
I designed the Expedient from nothing and then created several photographs to match it. Not easy! Incidentally, my friend who designs yachts inputted my hull data into his computer to see if the ship would float. It did, and was very stable. I'm not sure how many writers would bother going to this length, but all of this goes to create the Guild's own unique universe, I hope.

Zauberspiegel: Due to the complexity of the whole Guild's Universe, how did you manage to keep track of all your inventions, people and ideas?  Did you use any tools, perhaps software, or did you stick to files?
J . Mowll: I lived and breathed every aspect of the Guild for six or seven years. That crazy world is a part of me. I know it so well that I don't need files or software to keep track of it. I can just shut my eyes and I'm there in wide screen and technicolor. I can't get 5.1 surround sound because I'm a bit deaf in my left ear.

Zauberspiegel: You are a graphic illustrator, an author ... The Guild-books seem like a great chance to combine these two professions. Now that the Guild trilogy is finished, will you split again or are there further plans to continue with the Guild or your style of writing and designing books?
J. Mowll: I have a new book out next year in the UK called "The Great Space Race", and I'm working on a a strong idea for my fifth novel. These are not connected to the Guild trilogy, but both are moving in a new and exciting direction for me, and they certainly retain much of the trilogy's DNA. To give you a taste, for the Great Space Race I'm building a 3 metre tall rocket and a robot monkey, both to be photographed for the illustrative content.
I have plotted a sequel to the Guild Trilogy although I don't have plans to write it just yet. It would be called The Coterie of St Petersburg Trilogy.

Zauberspiegel: Last year one of the really big issues in Great Britain was the age bands for children books. There was a protest note by P. Pullman on this issue.  Each book will carry a specific marking indicating they are suitable for readers aged 5+, 7+, 9+, 11+ and 13+/teen. Some publishers seem to not add these, Walker books does. What do you think about the benefits and problems of this scheme? And do you think Age 9+ is a good choice for the Guild trilogy?
J. Mowll:  I'm not sure about the politics of age banding. It has good and bad points, but I suspect in the UK it is being driven by the booksellers' needs, rather than the publishers. I would say 9+ is good banding for the Guild Trilogy, but I know plenty of 20+, 30+, 40+ and 50+  who like reading them, so the logic of it isn't entirely clear to me.