... David Durham on Acacia, the Importance of Fantasy and "The War with the Mein" ~ 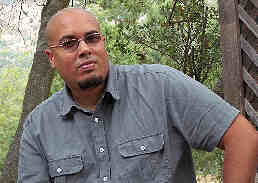 ... David Durham on Acacia, the Importance of Fantasy and "The War with the Mein"

Not very long ago I wrote a review (in German) on the book Acacia - War with the Mein, Book one of the Acacia Stories of David Durham.

The Acacia-book has been fascinating for various reasons. One of them was how David Durham developped his characters. He doesn't really decide as an author whether a character is good or bad, nor does he establish his characters as "really good" or "ultimate bad". The deep understanding of political connections and interactions made this book more than a fantasybook.

David Durham took the time to answer a few questions to us.
Zauberspiegel: Hello David, thanks a lot for taking the time to answer our questions - even though you are moving - so let me grab the chance and ask: Where do you move? And why did you decide to change?
David Durham: I have made a lot of exciting moves in my life (East to West Coast in America, to the Rocky Mountains, to Scotland and France, for example). This move, though, in not one of those exciting ones We have moved about three blocks from our old house. The Reason for the move? Well, the new house has a pool! Since it is over one hundred degrees Fahrenheit most summer days in Fresno, a pool is a big help with staying cool.

Zauberspiegel: The first book I read from you was "Acacia, Book One. War with the Mein". It was published in 2007 in the States and issued here in Germany in 2008. What other countries and languages does Acacia cover?
David Durham: I am happy to say that my German publisher, Blanvalet, was one of the first to acquire the book. Very smart, I think. They were followed by a British version and then an Italian edition. In the coming months it will be published in French, Polish, Russian and Swedish!

rd and First Novel Award from the American Library Association). His work has been published in the UK and in French, German, Italian, Polish, Portuguese, Russian, Spanish and Swedish versions. Three of his novels are currently under option for development as feature films.
He is not sure where he lives  has not been for about ten years. He has one foot in California, one in rural Massachusetts and his heart thumps for Scotland.
He can confirm that he teaches writing at Cal State University in Fresno and for the Stonecoast Low-Residency MFA Program. He is married to a lovely woman from the Shetland Isles, the knitwear designer Gudrun Johnston (http://shetlandtrader.blogspot.com/ - following this link you leave the Zauberspiegel-site), and they have two children, Maya and Sage.


Zauberspiegel: On your website you wrote an article on the question "Why Fantasy". Why did it seem important to you to write this article and publish it on you site?
David Durham: Because I had been known as a writer of historical fiction before that. I was making a big change. Or, at least, it would look to many people like I was making a big change. They were asking me, Why Fantasy? and Are you sure? and Is that going to work? I wanted my historical and literary fiction readers to know that I was as serious about writing fantasy as I was about any of my earlier projects. I wanted them to know that I was not changing who I am as a writer; I was just going to show them another side of who I am.
And, for fantasy readers, I wanted them to know that fantasy had been important to me for a long time. I was not just doing this on a whim. I was not doing it because I thought it was easy or because I thought I would sell more books. Just the opposite, I knew it would be very challenging. I was doing it because I had always been one of them; I just had not yet shown that in my published work.

Zauberspiegel: In this article you wrote "(Fantasy) connected me with the wonders of storytelling as a way to meaningfully explore life's great questions". What do you mean by this sentence? Does this mean it seems to be more meaningful than dealing with these questions in a more scientific way?
David Durham: I do not mean that fantasy or sci-fi is more meaningful than other genres of fiction, but I do think it can be just as deep, complex, insightful And it can often be more engaging at the same time.
For example, I read and enjoyed Ursula K LeGuins EarthSea books when I was an adolescent. I loved them. They were stories of adventure, of magic and dragons and difficult struggles. But they are also about significant themes: youthful hubris, religious dogma, self-doubt. Theres really a lot in all of LeGuins books, much more than just the plot elements of the story. But it is many of those plot elements  and the genre it in itself  that draw readers in. That is why I would say that fantasy taught me to read and love writing more than any other form.
Part of what I am pointing at in the sentence you quoted is that fantasy was not just an escape for me. It taught me things also.

Zauberspiegel: As far as I understood by your biography, you began with historic novels set in the historical United States and Carthage. How did this switch to Fantasy came to happen?
David Durham: Yes, I was an historical novelist first. I have loved studying history since college, and each of the novels I have written so far deal with a topic that really captured my interest. My first, Gabriels Story was about African-American settlers in the Old West. It is an adventure and coming of age novel, but I wrote it because I was fascinated to learn how many black people moved out to the Great Plains in the years after the Civil War. My second, Walk Through Darkness, was about two things: runaway slaves and slave catchers, and also about the many ways that the races have mixed in America  not just now but well back into our history. Pride of Carthage is about the war between Carthage and Rome, which I found fascinating. Hannibal was such an amazing character. I jumped at the chance to write about him.
What I am leading to is that the same thing happened with Acacia. I got fascinated with the idea of writing fantasy and with some plot ideas and characters I imagined. The world and the story got its hooks into me just like those historical stories did. My publisher knew it might be a tough switch to make, but they believed in me and were very supportive.

Zauberspiegel: It might seem a stupid question, but for some reason I'm striving to ask it ever since I closed this book. To me it seems to be more than "only another fantasy book". So: Why should one read the "War with the Mein"?
David Durham: Thank you. For me, it is more than just another fantasy book. That is partially because it is mine! But also I wanted it to be a serious book, as well as an entertaining one. I hope the book is an adventure and an escape for the reader, but I still want it to deal with the sort of complicated issues that shape real human history.
So, it is not a story of ultimate good versus ultimate evil. I dont really believe in that. In the novel, the bad guys have many legitimate complaints against the tyrannical rule of the good guys. The Acacians have, in fact, suppressed the people in the rest of the empire. They have exploited them and even enslaved many of them. They use national myths and patriotism to disguise their crimes, and they sedate the masses with a drug that keeps them malleable. Also, there is a large trade/business organization that virtually runs the world.
Any of this sound familiar? I hope so. Familiar and yet different, partially so that we can see our own problems in this fantasy world, and partially because dealing with realistic problems is part of what puts my characters in danger. Of course, there is more to it than that. There are also giant, bloodthirsty beasts and angry sorcerers and ancient curses and warrior princesses and big battles! 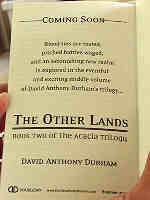 Zauberspiegel: In the Forum on your website you mention "The Other Lands" as a possible title. Will this be the title of the new book? And when will we have a chance to read it (in English and/or) in German?
David Durham: Thanks for asking. Very glad to hear you would like to read it  in any language!
So far, every body seems happy with the title The Other Lands. I cant say for sure, though. Once the book is complete I will talk it through with my publisher, just in case there is a better title that I did not see.
Doubleday plans to publish it in the US in September of 2009. Blanvalet does not have the rights for it, so we would have to discuss that with them once the book is finished. I would love it if they wanted to continue the series, and if they do I am sure they will try to get the translation done as quickly as possible.