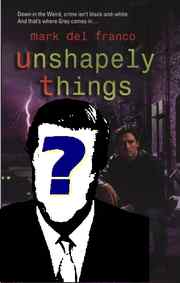 There are quite a few books available on the German bookmarket concerning "Urban Fantasy". And among them are some books that are really worth reading.
One of those books is "Unshapely Things", an urban fantasy-book written by the author Mark Del Franco. This book is now available in Germany.
Since the book really appealed to me, I contacted the author with a few questions on his books and urban fantasy. Mark took the time to answer the questions in details and gave very interesting answers.
Mark Del Franco writes about himself on his homepage:

Mark Del Franco spent several years in the publishing field in editorial and administrative roles and in the institutional finance field as a proposal writer. He currently is pursuing a freelance career in both these fields.

Mark Del Franco lives with his partner, Jack, in Boston, Massachusetts, where the orchids tremble in fear since he killed Jack's palm plants.

Zauberspiegel: Urban Fantasy is extremely popular in the US at the moment. In your opinion: What are the reasons for this popularity?
Mark Del Franco: I think urban fantasy is popularand will remain sobecause the settings of these novels are familiar to readers. A reader might be uninterested in, for example, high or epic fantasy because they cannot relate to those worlds.  The same reader may have no problem entering into an urban fantasy environment.  In the mass market media, people point to the television series Buffy, The Vampire Slayer as opening up the acceptability and popularity of using fantastic and supernatural elements in the real world.  Most urban fantasiesand its sister genre, paranormal romancepresent worlds that readers can envision themselves in and, as result, connect much more readily with the characters in what if situations involving  magic and the supernatural.

Zauberspiegel: »Unshapely Things« is a mix of fantasy story and detctive novel. How did you come up with the idea to combine these two genres?
Mark Del Franco: It was an accident!  Believe it or not, I actually dreamed the first chapter.  The image of this dead fairy in a city alley stayed with me.  As a writer, I kept asking myself what would be the story behind the scene.  I am a fantasy fan, but also a fan of detective novelsPatricia Cornwell, Robert Parker, Michael Connellyit seemed natural to combine my two favorite genres to find the answer of how a dead fairy would appear in a modern city.

Zauberspiegel: The action of »Unshapely Things« takes place in the contemporary Boston. I don't know very much of this city, so I would like to know: How accurate is the picture of the Boston you describe in your novel compared to the real Boston?
Mark Del Franco: I live in Boston and love the city.  All the locations in the book are either real or changed slightly.  For instance, the Weird neighborhood is based on a warehouse area where many artists and college students lived.  It is gone nownew development is being builtbut I took that neighborhood and made some choices about how it would be if the development didnt happen and down-on-their-luck fairies moved in.

Zauberspiegel: Dark places, racism, drugs  the Boston described in your novel has got a lot of dark sides. Are there really so many problems in this city, or did you make it all up just for the novel?
Mark Del Franco: A little of both.  All cities have crime.  Boston is a very prosperous city, but there are poorer neighborhoods.  People forget that sometimes. I am giving a snapshot of a particularly bad neighborhood that probably exists in all large cities.  It is also a very multi-cultural city.  Racism still exists, but not as bador open anyway--as it once was.  Weve made progress.  I tend to take existing conditions and exaggerate them to create drama.

Zauberspiegel: Germany and German elves play an important part in your novel. Why Germany? And: When you developed the German society of the feys, where did you orientate yourself?
Mark Del Franco: I love mythology and history.  As societies, the ancient Celts and Teutonic peoples had many similarities.  As I developed the world of Connor Grey, I wanted the opposing fey to resemble each other, but have differences.  Much American fantasy uses Celtic mythology.  I think the Teutonic world is similar enough for readers to feel a familiarity, but new enough to keep it interesting.  I also wanted to play a little politicsGermany and the U.S. often work together for common goals, but they also disagree on many, many things.  I wanted to capture some of that friction and cooperation.

Zauberspiegel: The depiction of elves in your novel is quite diffrent from the picture you get from this people in other novels. Some of them are even prostitutes. Why did you change the  common depiction of elves as haughty, regal beings so profoundly?
Mark Del Franco: In reading earlier sagasthe Prose Eddas, the Mabinogianyou realize that many of the magical and supernatural beings were really quite rude or had menial jobs like herders and servants or were unattractive beings hiding in the forest.  Over the centuries, those images fell away to more pleasing ones.  Of course, in fantasy literature, Tolkien had a profound impact with his use of elves as beautiful, elegant people and many writers use that template.  Part of the appeal of urban fantasy, I think, is bringing the grittiness back to fantasy to reflect a more real world.

Zauberspiegel: »Unshapely Things« is the first novel in a series about the druid Connor Grey. Did you intend to write a series from the beginning? If yes: Is there a central theme that occurs throughout all novels? How many books about Connor do you intend to write?
Mark Del Franco: I did not write the first book knowing there would be a series, but I realized it could be one.  As I wrote the background for Unshapely Things, a bigger world developed and I knew I had a bigger story.  I was fortunate that my publisher agreed.  I have four books under contractthe third book, Unfallen Dead, will be coming out in English in the U.S. in January 2009.  I can easily continue the current story arc for seven to nine books.  The world is so rich for me, though, I have no problem thinking about what happens after that.
In terms of themes, I dont like to self-analyze too much because I want readers to draw their own ideas from reading.  I will say, though, that I am very interested in issues of identityWho am I? What can I do?  What cant I do?  I also like to think about trust and relationships.  Is everything and everyone how they seem, or am I missing their side of the story?  Another thing that interests me is how very different groups figure out how to co-existthe very essence of living in a city.

Zauberspiegel: Can you tell us a bit about the following novels starring Connor Grey?
Mark Del Franco: Unshapely Things is the first, in which Connor must hunt a serial killer and stop a world-wide cataclysm.  Unquiet Dreams comes next.  Connor must solve the murder of a young boy as well as a German diplomat, and ends up fighting against a madman.  Your readers will be pleased to know that they will learn much more about the German elves in this book.  The third title, Unfallen Dead, has more murders to solve, which leads Connor to the Land of the Dead where he meets the German elf Bergin Vize who wrecked his powers.  This story shows Vize as much more complicated than just a bad guy.  Im writing the fourth book now, which means its top secret until my editor sees it.  All I can say is, things get worse for Connor and the Weird.  Oh, and he might get a dog.