First: »Don't say anything to your Aunt, but a dog at the clinic … It looked like it was dead and it woke up and Bam!«

Fourth: «Sponge John; You mean Sponge Bob? No, well, you see, there was a copyright problem …«

Fifth: »And then you wonder why everyone thinks French girls are sluts…« 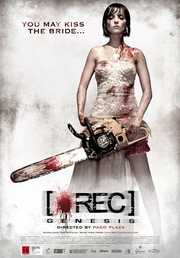 »A wonderful love story« - Everybody dies … (I really, really wanted to see a scene with a zombie popping out of a cake … oh, well - not this time!)

First off, spoilers will abound in this review.  Second off, I will clearly state, that I loved the first 2 [REC] movies, and I also loved this one.  And, moreover, I eagerly await the 4th one (which is due out sometime in 2014.)

The biggest thing to appreciate and understand (in my view) is that this is a love story, with zombies.  And, not only zombies, but zombies with a slightly different twist.  [REC] 1 and [REC] 2 start out the franchise with a very strong footing leading with a particular style (what is commonly called "found footage") and setting a tone with adding a new component to the zombie lexicon:  Religion.  Now, not in the sense of, "Oh, God; we're all gonna die!".  Nor, in the sense of, "Hell is full, let's kick some of the blighters back to Earth and play what's what."  No.  In the earlier [REC] films, the zombie contagion is not only an infectious viral agent, it's also a component of a devilish curse; and by devilish, I mean demons … Muahahahaa.

But, to give a bit of a background to where we are with [REC] 3, [REC] 1 and 2 focused on Angela, a news reporter who was doing a ride along with a firefighter crew.  She, and them, got caught up in the disastrous events that showcased the development of a viral / demonic hybrid.  Also, with the proliferation of "found footage" style movies, I personally believe that these two movies nail that style perfectly; blending the aspect of the camera as part of the character mix.  The camera, is the unrelenting eye of existence watching events fold out as they will, unloving and unloved.  The end of both movies, separately, are very chilling; combined, they provide a great twist in the way zombie movies run.

Feel free to look up my previous reviews on the first two [REC] movies … trust me, they're fun movies!

The movie begins with the fantasy wedding scenario.  I would imagine that there's not a woman alive that would not want this as their dream wedding (sure, some would want completely different types of weddings; but, the majority of people who are inclined to the "perfect wedding" - male and female alike - will be moved by the type of environment set for this wedding).  Beautiful location, spectacular friends of various stripes.  The whole thing, for the first 20 minutes plus is/will be the perfect, beautiful wedding thing.  (That, is not my cup of tea, but, it's a perspective thing, aye?)

The focus of the camera shifts between Atun and Adrian.  They're a combination of professional film maker and young lad just having fun with it.  This part of the movie is your standard mix of people getting together to celebrate the union of two people in that gosh darn old fashioned wedding thing.  So touching, so pretty, so … Holy Uncle Pepe!  That's when the fun begins.

Bam!  The movie runs at a pretty good clip, as a wedding movie, and then switches quickly and completely over to zombie movie style!

Zombies (fast at first) crash the party and things heat up.  At this point, the "found footage" style, shifts to the more traditional cinematic style, third person.  Shots are mixed in with various night vision (man, these [REC] people love their night vision shots!) surveillance cameras, etc.  In quick succession, the guests are gruesomely slaughtered, zombiefied, revived, and set loose on the grounds!

Most of the rest of the movie then moves towards split perspectives from between Clara and Koldo, the zombie crossed lovers who only want to be together.  Some highlights:  "The Knight outfits", Sponge John (oh my god, I laughed a lot when I saw him), Uncle Pepe and the blender, Clara with the chainsaw (goodness, how can you have a zombie movie without a chainsaw?), Rafa and Natalie, and Granddad (and his darn hearing aid).  For gore, it's not as splattered everywhere as many another zombie movie, but it is liberally applied, and enough is given to show us a rollicking good time!

I've heard a number of people state that they did not like this movie, as it diverged greatly from the original two.  This movie takes the game of the infection, a step farther, and broader, laying the groundwork for the world wide apocalypse that is pretty much a given in any zombie infection scenario.  I understand where they come from, as, I expect that they were expecting more of the pure shock, adrenaline, and contained fun that the first two movies had.  Also, there are changes in style, and overall character development.  (Yes, I do love Angela; she was magnificent in those two movies!  And, I hear she's coming back in the fourth one!)  But, franchises need to grow, in order to expand and develop.  I believe [REC] 3, offers a new skew on the overall zombie movie franchise, and creates a backdrop for an expanded world series for following movies.

Now, for those of us in the West, this might be a rough movie to watch for some (sub titles and all …), and the pacing slides quite a bit differently than most of the zombie movies being released hereabouts.  And, the shifting perspectives - via quick changes in point of view, and camera shots used and all that - but, overall, as you may be able to tell, I love this movie just as much as I loved the first two.

It's fun!  And, it doesn't' take itself completely serious.  Zombies, lots and lots of zombies!  And I like that in a movie.