In Memoriam
William Hinzman
(October 24, 1936 to February 5, 2012)
I have this very, very clear image / memory from a convention a couple of years ago:  I was on a panel with a group of people, and we were discussing our particular penchant (that being zombies, of course), and this random face peeks into the room full of people with a quirky tone, is this room full of brains?  There was much merriment at this, with which he disappeared back out to the hallway.  It was completely random and out the blue - a perfect moment at a con. 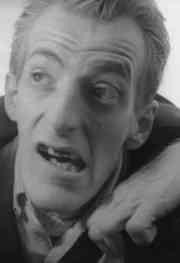 MI never had the pleasure of actually meeting Bill; I missed my chance at that con.  I saw him around a number of times - engaged in chat with people who happened by or at a table hamming it up.  I thought there would be time later, but unfortunately that time never came by.  In the greater scheme of things, if you miss your opportunity, then its usually gone.

Night of the Living Dead has always been a movie that I, and many others, have been very fond of.  It is one of those pivotal, essential pieces of the lexicon of the zombie movement from its earliest days in Western society.  And Bills character, the very first zombie/ghoul that we are introduced to, was the epitome of what that film represented.  His character set the tone for the movie, the horror of the resurrected dead and their insatiable appetite for the living.

The iconic memory of his character will for a long time be remembered as one of the most classic of representations of the zombie genre.

His passing, albeit governed by the frailties that humanity is bracketed by, lessens us all.  He will be missed by many fans, and by the community as a whole.