It is August 12, and as of the writing of these words, countless opinion pieces have already been written, regarding the Hugo awards being given out at the 73rd World Science Fiction convention.

Some of those pieces have been supportive, others have been critical.  Almost all of them have discussed the Sad Puppies project, which I helped organize for this year. 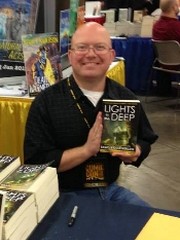 In its third iteration, Sad Puppies determined to recommend numerous stories, artists, editors, books, and other works, for the purpose of pushing back against some of the biases and blind spots which have typified Hugo awards final ballot selections over the past few years.  Such as the tendency to ignore independent writers.  Many people have wondered why Andy Weir's THE MARTIAN did not show up on a Hugo ballot during its first release, and the answer is because the Hugo voters still tend to ignore books that aren't published traditionally.  Also, the Hugo voters have tended to ignore writers of tie-in fiction.  It hasn't matter whether or not these independent authors or the authors of tie-in works have been writing good stories.  They have been caught in the shadow of a conventional prejudice.

Since Hugo selection is a democratic process, the obvious way to combat a conventional prejudice, is to encourage people to participate.  Such encouragement is not new to science fiction's so-called most prestigious award, but there's probably never been a more concentrated effort to get people who were otherwise unaware of their ability to vote, or who felt like their votes might not count, to become involved in the selections for the final ballot, as well as the final voting for the award proper.

This has obviously made a great many people very unhappy.  There are authors and publishers who've benefitted greatly from a diminished voting pool, because when the total vote count is small, it doesn't take more than a few dozen voters working in concert to ensure that a given individual or a given piece of work will be on the final ballot.  Guaranteeing a win is much harder, but for most people who take an active interest in the Hugos, it's the assembly of the final ballot that's the primary focus.

And because Sad Puppies dominated this year's ballot assembly, a great many people have taken to their blogs to make dire pronouncements on the affair.  Several have even gone so far as to bring the non-science fiction tabloid media into the argument, with manufactured accusations of political, social, and procedural wrongdoing.  This, of course, also brought in media from the opposite direction -- the counter-media, to the establishment media -- thus Sad Puppies and the Hugos have gained a tremendous amount of notoriety, both good and bad.

When the rhetoric and pontificating is boiled away, though, the ultimate point of Sad Puppies has been to encourage people to become involved in the process.  The Hugo award only matters if the Hugo is actually representative of a wider body of consumer and fan interests and tastes.  For the past ten or fifteen years, the Hugo has tended to represent the interests and tastes of a relatively small collection of individuals.  This year, Hugo participation is at an all-time high, and the predictability of the results -- which typified past years -- has been removed.

In other words, the Hugos have been taken off the script.

This is a net boon for the award, assuming participation continues to increase in future years.  Hopefully, even without the drama, people will value the Hugo enough to want to have a say; both during the final ballot assembly, and on final voting.  There are millions of science fiction and fantasy fans all around the world.  Until now, almost none of them have had any say in the Hugos.

Hopefully, Sad Puppies has helped to change that equation.