Brad Torgersen is writing an essay for the Zauberspiegel about the Puppy campaigns that claimed most of the spots on this year’s Hugo Award ballot. I was invited to present the other side.

The thing is, there is no “other side.” It’s not a battle between Puppies and Anti-puppies. It’s two organized, separate-but-overlapping puppy slates (Sad and Rabid), their supporters, and…well, pretty much everyone else 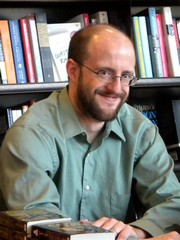 People are unhappy with the puppies for various reasons, and with various levels of anger, but there’s no organized other side, no coordinated war against the pups. There’s no anti-puppy conspiracy.

The Background:
The Sad Puppy campaign started in 2013, when author Larry Correia tried to rally his readers to nominate him for a Hugo, framing it as a choice between fun pulp stories like his and “heavy handed message fiction” championed by the “literati elite.” (Source)

Correia returned in 2014 with the same message.

He explicitly described his efforts as a slate, and stated that he’d worked to get right wingers on that slate, including Theodore Beale, who made the Hugo ballot but ultimately came in last, behind No Award. (Source)

“[T]he voting body of ‘fandom’ have tended to go in the opposite direction: niche, academic, overtly to the Left in ideology and flavor, and ultimately lacking what might best be called visceral, gut-level, swashbuckling fun.”

So Torgersen—who was nominated for a Hugo in both 2012 and 2014—set out to fight back against the voting body of fandom that was apparently keeping people like him from getting nominated for Hugo awards. (Source)

Theodore Beale also put forth his own Hugo slate, the Rabid Puppy slate, nominating himself in two categories and one of his own authors in six.

Between the two slates, the puppies dominated the final Hugo ballot.

None of this violates the letter of the Hugo rules. However, the puppy campaigns are the first time we’ve seen organized slate voting. Because of the way the nomination process works, a relatively small group of people voting more-or-less in lockstep can—and did—have a disproportionate effect on the ballot.

The Unravelling:
Torgersen claimed Sad Puppies was about getting good works on the ballot, but as time went on, it’s become clear it’s more about politics and vendettas and vindictiveness, including bashing John Scalzi for a perceived slight against Baen, taking shots at Nick Mamatas, or making up insulting nicknames for his “enemies.” He attacked Teresa Nielsen Hayden after she (correctly) pointed out that the Hugos are representative of Worldcon, not fandom as a whole:

TNH: When I say the Hugos belong to the worldcon, I’m talking about the literal legal status of the award. But I also know that one of the biggest reasons the rocket is magic is because it spiritually belongs to all of us who love SF.
Brad: You hear that, fans? We don’t count. The Hugo is Teresa’s personal prize. Hers, and that of the other TruFen and CHORFs. (Source)

Several nominees withdrew as they learned more about the situation. Torgersen immediately accused “The Left” of hounding nominees off the ballots, even when those nominees explicitly stated this wasn’t the case. (Source)

He refused to accept that people could disagree with slate and bloc voting, claiming,

“100% of the opposition to SP3 can be distilled down to that single concept: snobbery.” (Source)

Some suggested the slate wasn’t about nominating overlooked works, but about Torgersen putting his friends on the ballot. Michael Williamson noted that his own nomination came about when,

“Brad asked what I’d published that might be Hugo eligible, and I mentioned ‘Wisdom.’” (Source)

Torgersen’s commentary got more paranoid and over-the-top, comparing voting No Award to the Judgement of Solomon, likening fandom to a Gulag, and even trying to link it to 9/11. He recently proclaimed,

“If they could clap us in shackles, put us into the boxcars, and send us to the icy wastes to die, they would do it in a heartbeat.” (Source)

Motivations:
I can’t read Torgersen’s mind. He’s said it’s about honoring authors and works that were overlooked, but he consistently slides into attacking “political correctness” and “CHORFs” and “affirmative action fiction.” (I’m not sure what he means by that last label, except that in recent years we’ve seen more stories written by and about people who aren’t straight white men.) While he might be genuinely frustrated that awards went to stories and authors he didn’t like, Torgersen spends most of his time and energy on his imagined war against liberals, the left, “Social Justice Warriors,” and so on.

It’s been claimed that Torgersen is doing this for publicity to boost his career:

“I remember his response. His entire aim was to position himself as the Anti-Scalzi because it hadn’t hurt his mate Larry. He intended to Make Waves and Be Loud in the name of attracting the attention of the right wing money.” (Source)

Even Torgersen’s complaints about works and authors being overlooked are based on flawed or false assumptions. He complains that while

“the big consumer world is at the theater gobbling up the latest Avengers movie, ‘fandom’ is giving ‘science fiction’s most prestigious award’ to stories and books that bore the crap out of the people at the theater”

… ignoring or ignorant of the fact that fandom not only nominated The Avengers in 2013, the movie won a Hugo that year. (Source)

“In point of fact, every author who ever published with Orson Scott Card's Intergalactic Medicine Show…have been left out in the cold for purely ideological reasons,”

conveniently forgetting or ignoring people like Mary Robinette Kowal, who won a Hugo award after being published in that magazine. (Source)

As for the other puppies, we can look at their own words to get a sense of their motivations. Here’s a sampling:

Not everyone in the Sad and Rabid Puppies wants the awards destroyed. Some nominees care very much about the award. But primarily, the Hugo campaigns seem to be a smokescreen for the top pups’ cultural war.

For some, it’s frustration at the puppies’ deliberate fanning of hatred and fear, efforts that recently led one puppy nominee to write to the Spokane police department, claiming Worldcon Guest of Honor David Gerrold was

“insane and a public danger.”

Discussion at Torgersen’s blog has at least once descended to threats of violence and attempted doxing. (Source) While I don’t believe Torgersen actively participated, he’s certainly had no problem hosting such ongoing ugliness, as long as it was targeted against his enemies.

There’s a great deal of frustration at what appears to be a backlash against inclusiveness and diversity, including the drastic reversal of a five-year trend toward gender equality on the ballot. (Source)

Then there are people who are angry because the pups’ radicalism and extremism drown out efforts to discuss any legitimate problems. (For example, I agree with Brad’s initial comments about wanting tie-in work to get more recognition. Despite this stated goal, the puppies failed to nominate a single tie-in work.)

Finally, many people are angry and sickened at the taint this mess has had on Worldcon and the Hugo Awards, things that should be a source of joy and celebration for the genre.

#1 Greg M. 2015-08-21 10:28
It's worth noting how many links, citations, and direct quotes there are in Jim's piece. Contrast this with Torgersen's, which is utterly devoid of supporting evidence.
#2 Fail Burton 2015-08-21 11:07
Notice how Hines suddenly swallows 3 years of his own racial incitement and incitement to hate men via false rape statistics, "#justlisten" initiatives that would do away with due process and constant insinuations of institutional racism in SFF fandom he publicly admits he's never seen. When it comes to irrational suspicions of men and whites, there is no tenet of radical feminism Hines has not ardently supported.
#3 VGN 2015-08-21 14:19
Universal fact of life? Stuff changes.

But here’s the thing: I really like typewriters. Typewriters have
gone away. But I don’t blame the disappearance of typewriters on a vast
politically correct conspiracy against typewriters and everything
typewriters stand for.

The Sad/Bad/Dangerous-To-Know Puppies just need to form a club among
themselves where they can play together with their “old traditional”
(manual?) sci-fi… and stop whining about it.

Thanks for your time.

I have to go to Staples now — they still have ribbons for my old Royal!

I've written four Editorials under the motto: The Entertainment It's a-Changin' and it is recurrent theme in my articles in the Zauberspiegel. But take the example of Perry Rhodan. Some people think, the series schould be written like it was in the sixties or seventies. But if the writers and the publisher do so. There would be no weekly dose of Perry Rhodan anymore ... So yes: Entertainment it's a changin'

It's changin' and therefore you can't claim, that it should be a cmebak of those concepts and the writing of the past.

And I quote with pleasure Monty Python:

Adopt, adapt and improve. Motto of the round table.

#5 Jim C. Hines 2015-08-21 15:30
Thank you Fail Burton/James May, for providing additional support for my argument that puppy supporters such as yourself are much more interested in your made-up political war and citation-impaired accusations about SJWs than you are about the Hugo Awards, or recognizing worthy works.
#6 Richard Brandt 2015-08-21 19:33
Hey Jim, you forgot to mention that in the very same comment where Brad made the claim about writers from Card's magazine being shut out, in his very next sentence he made an equally bogus claim about Writers of the Future:

"Just like plenty of Hugo voters hate Scientology and don't want anything associated with Hubbard to get on the ballot—despite the fact the Writers of the Future volumes of the past ten years contain great new works by great new authors, some of whom are indeed Campbell and Hugo worthy."

...ignoring the Writers of the Future winners who have gone on to be Hugo winners and nominees like Robert Reed, Stephen Baxter, Eric James Stone, David Levine, Jay Lake, and some Hines guy.
#7 Rizzi 2015-08-21 22:00
Fail Burton, you are absolutely correct. Jim C. Hines, among others, is the direct cause of the backlash against SJWs in the field.
#8 Fail Burton 2015-08-22 08:51
Citation-less? You said as much in your Continuum Guest of Honor speech.
Kommentarliste aktualisieren