... »Muse« Sarah Hulcy on the bunch of Heroes in Hell, Janet Morris and the contest 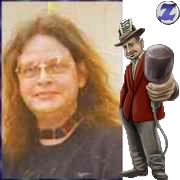 Together with Janet Morris and her »bunch« around the Heroes-in-Hell series, we have launched a context »Whom do you ...«

To give you a short glimpse of what the Heroes-in-Hell group is about, we invited one of them to have an interview with us: Sarah Snyder Gray Hulcy. Her importance is beyond messure - so the group calls her »Muse«. There actually is no better person for an interview on the »Heroes-in-Hell«-group.

Zauberspiegel: Sarah, we know each other for quite a while already from the Working Group for the authors of stories in Heroes-in-Hell. We always refer to you as the "Muse" ... why is it so?
Sarah Hulcy:  When I became a member of the Group, the first thing I did was to start capturing and organizing information from the FB page so all members of the group would have access to all discussions.  I had created a few documents in the first week and Janet decided on the spot that I was the Group Muse!  Everyone has been calling me that ever since.

Zauberspiegel: And before drowning in the Heroes-in-Hell stuff, who are you, Sarah?
Sarah Hulcy: I'm a 58 year-old workaholic; my background is in legal work and advertising (typography and commercial art).  I typed very fast for many years and then discovered I had ruined the tendons and nerves in my hands and arms.  By the time I realized what had happened, using ergonomic keyboards and other accessories would not help me anymore.  In 1996 I was taken off work by my doctor.  I was on quite a lot of medication for several years and pretty much sat in my house reading (a habit I had from my childhood).  My cousins (I have about 40 first cousins) insisted that I get a Facebook page, even though I was reluctant. They convinced me that it was much easier to keep track of each other than doing round-robin emails for family news.And the rest is history!

Zauberspiegel: So what are your doing in the Hellish surrounding? And do you add stories was well?
Sarah Hulcy: One day, I had been reading a copy of Tempus with his right-side companion Niko and came across a quote that I related to really well.  I posted the quote as my status and credited Janet Morris.  Facebook notifies you if someone uses your name in a post so Janet saw the quote.  As Tempus Thales, she emailed me to find the rest of the attribution for the quote, since the book was printed in 1987.  In the meantime, we "friended" each other.  I located the information and sent it back to her.  We began talking about her books and what had been happening since the 1980s (she also told me it was really she, not some page administrator, sending the emails).  After I stopped hyperventilating, we continued corresponding.  As the group grew and more information was exchanged, Janet told me she thought I probably had a story or two to tell.  I had never written fiction before, just lots and lots of legal documents and memos and instructions.  So I wrote "Orientation Day" about the first day lawyers get to hell and what they have to learn immediately.

Zauberspiegel: How did you get in contact with Heroes in Hell and what is the reason that you are so involved in this whole issue?
Sarah Hulcy: That was how I got in contact with the creator of Heroes in Hell which I had read back in the 80s when the books all came out.  One day, Janet mentioned on her Facebook page that she was forming a "Lawyers in Hell Writing Group."  I commented that I was uniquely qualified to comment on the subject since I had worked for lawyers for decades.  One of the other authors who was helping set up the group asked Janet, essentially, "Who is this woman?" and she replied that I had a great "ear" for writing and told him to invite me into the group.  I joined and have been hooked ever since.  I have always needed something to be involved in, and since I started using computers since they were the size of a bedroom, I "grew up" with the technology.  Working for lawyers makes you learn about new technology as fast as it becomes available and that's what I had done.  Unfortunately, I had been off work for over a decade and knew I was falling further behind.  This is perfect for me because I get to learn more things in the electronic universe.

Zauberspiegel: It all sounded as if the group and the series are so special. Well, it is a - let's say "nice" - idea to stuff literally everybody to hell. But what exactly is it that makes this so very special in the market?
Sarah Hulcy:  In the 1980s, this was a very different series; it was created by a woman, for one thing, there were people collaborating on stories and characters in a way that was just then being established called a "shared universe."  Most of the stories have a dark or biting sense of humor which I love.  Of course, in the 1980s we did not have instant access to each other like we do now, but the stories still came out nicely braided.  Now, we can do this so much faster and collaborate between many more people at once, we are able to make the stories even more connected.  One of the things I did at the beginning of the Group was to get out my old copies of Heroes in Hell and reread all of them while making lists of characters and locations that had already been introduced into the series by the earlier authors and that allowed our new authors to find out how things worked in hell (or didn't as is more usual) and then I kept track of which characters various authors wanted to use so we didn't have more than one author trying to write the same character.  They've been good about not fighting!  And we always ask before we "borrow" a character from another author.

Zauberspiegel: What awaits a reader who is trying to dive into this Hellish universe? What would you suggest a new reader ... eg what volume to start with, where to find additional information and such?
Sarah Hulcy:  Personally, I would tell them to read the original 12 books of the series because that was where many rules and characters were established.  However, it is not necessary to read ALL the previous books or even any of them.  Lawyers in Hell is a very complete volume and our authors have used information from the original volumes to inform their stories in such a way that if someone had never heard of Heroes in Hell and picked up Lawyers in Hell, they would not have any trouble "diving" right in.

Zauberspiegel: Writing and reading about Hell and people in hell can - apart from simply being entertaining to follow some endlessly rolling stones to the pike of a mountain - these stories offer more than simple entertainment?
Sarah Hulcy:  There is a great deal of philosophy and mythology contained in these stories from many mythologies. In fact, in the new volumes authors have explored other "underworlds or afterworlds" than the standard Judeo-Christian hell.  Every civilization has its own mythos and hell is much bigger and more interesting with the addition of these new places and beliefs.

Zauberspiegel: The Heroes-in-Hell books are written by American and Canadian authors as far as I know. In the Adventurer in Hell book you will have German authors for the first time. You read all stories ... did you note any specific differences between the way of storytelling and such?
Sarah Hulcy:  It appears that the German writers are more lyrical in their approaches to their stories, possibly more ethereal.  I am thoroughly enjoying editing these stories and it has been very interesting especially since, even though you all speak and write English very well, the syntax and usage of English as a second language is quite different from someone born and raised in the U.S.  I don't see a great deal of difference between the U.S. writers and the Canadian writers, but there is a great deal of intermingling between the two countries because of our locations and we have access to many ideas and objects from each other's countries.

Zauberspiegel: With all the stories and volumes you now know. Do you dare to say which story you like most? Why? And could you give us a paragraph from the story that impressed you very much?
Sarah Hulcy:  One of my very favorite stories (yes, there are several and for several reasons) is a story from the first volumes about Satan's pet/familiar Michael, a "hell-cat" furry, with bat-wings and acid saliva.  Michael is kidnapped and passes through a number of hands before being "rescued."  You caught me not at home with my library, so I don't have the actual volume to quote from, but suffice it to say, the Queen of Sheba tries to clear away a few people by using Michael as her "weapon of choice" until someone calls her on it.

Zauberspiegel: Heroes-in-Hell - would you say it is a special interest series? Mainly dealing with issues of Paranormal, violence, ororor ... And if it is: What makes it interesting to everybody?
Sarah Hulcy:  It is a special interest series in that it is set in a shared world/universe that has been growing and changing for over 20 years.  I have always enjoyed shared world series but especially where the original author would allow others to write stories in their domain.  This just happens to be the most darkly funny of them all.  It is also set in the past, present and future of humanity so it's not like reading about an imaginary "planet."  I intend to continue being the Muse of Hell for as long as possible and hopefully, I will become a better (and more well-known) writer as we continue this journey.

Zauberspiegel: One last question: You are part of the jury in the contest about the upcoming book Adventurers in Hell. What does it mean to you to be in the jury together with Janet Morris (the boss) and Chris Morris her husband?
Sarah Hulcy: Well, first of all I dont feel so very important to be part of this jury, yet I feel honoured and I am proud of the fact that my work is so appreciated. I work closely with Janet, usually by phone, email or Facebook, so I know we will be a good team, and I am already looking forward to discuss about the characters and reasons for Hell provided. The characters we have received so far are really interesting, and I cant wait to see more wonderful ideas.