... with Otto Penzler on Mystery yesterday and today in the USA and the World (Part 1) 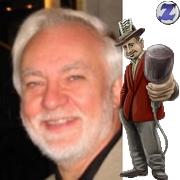 ... with Otto Penzler on Mystery yesterday and today in the and the World (Part 1)

Otto Penzler , (born 1942) is one of the experts not only among the US-mysteryexperts. He is not only mysteryfan but also acted as publisher, editor and trader (he owns The Mystery Bookshop, presumably the biggest Mysterybookshop worldwide which he opened June 13th 1979).

In 1977 he won the Edgar Award (the Oscar of Mystery) of the Mystery Writers of  for his book The Encyclopedia of Mystery and Detection in the Category Best Critical/Biographical Work.

During the Bookfair 2007 Bettina Meister discovered his Pulpfiction Anthology (Vol. 1 THE CRIMEFIGHTERS , Vol. 2 THE VILLAINS and Vol. 3 THE DAMES) which we are lucky to call our own now. Thanks to the great help of Emma Ward of Quercus Publishers (looking forward to meet you at the Bookfair this year, Emma), we had the chance to have an interview with Otto Penzler. Reinhard Jahn, owner of the website Lexikon deutscher Krimiautoren  (Encyclopedia on German Mysteryauthors) supported us in this. Thanks for that.

The first part of the interview we talked to Otto Penzler on Mystery in the yesterday and today. In the second part well turn towards Europe (this is and Jerry Cotton) and ask for some references of the Master himself.

Zauberspiegel: You have issued three books on pulps so far (Crimefighters, Villains, Women). They contain real treasures of literature. Yet I think there might very well be more. Will you be issuing more books? And for the German readers: Are there German publishers interested in Pulp Fiction already?
Otto Penzler: There are many more pulp stories, of course, and some wonderful ones, that simply couldn't fit into these three books, even though they are very obviously large volumes. At the moment, however, there are no plans for a fourth volume. The third, PULP FICTION: THE DAMES, has just come out, so we might need to rest for a while. Surprisingly, I think, because I know many German readers like hard-boiled and noir crime fiction, no German publisher has decided to acquire rights.

Zauberspiegel: Pulps have been the start for many exceptional writers and characters in the history of crime-stories. How did the pulp genre rise  and why did it go down again?
Otto Penzler: Soon after WWI, there was a great change in the educational system in and literacy became more widespread, so many people wanted material to read. Inexpensive paper (known as "pulpwood") was used for a large number of popular magazines and they took the generic name of "pulps" from that paper. They were inexpensive to produce and so many people were able to buy them in vast quantities, especially during the Great Depression. The era of the pulps ended soon after WWII, when the mass market paperback book became popular; they were also inexpensive, and far more convenient to carry.

Zauberspiegel: For us Germans: What were the most outstanding titles among the pulps? Who were the publishers behind the pulps? And how big were the differences between the best and the really bad ones?
Otto Penzler: The greatest of the pulps were in several genres. In science fiction and fantasy, the giant was WEIRD TALES. Among "hero" pulps, THE SHADOW and THE SPIDER were huge, as was THE PHANTOM DETECTIVE. Among mystery pulps, the best and most successful were DIME DETECTIVE, DETECTIVE FICTION WEEKLY, and the greatest of all--by far--BLACK MASK. The best of them produced wonderful writers still read today; the worst were so unbelievably bad that it is almost impossible to imagine they could have been published. But this is true of most things in the world: there is greatness, a vast sea of mediocrity, and some things so terrible that they should be arrested.

Zauberspiegel: Lately it seems that  like in your anthologie or in Hard Case Crimes  topics in pulp-style are being published again or being written. Do you think there is a renaissance of pulps resp the pulp-topics taking place?
Otto Penzler: The pulp style has never gone away. Mickey Spillane, the most successful mystery writer who ever lived, bridged the dying days of the pulps with the advent of the new wave of hard-boiled writers. Like the pulpsters, he didn't waste a lot of words on descriptions or analyses of what people were thinking or feeling; he filled his books with movement and action.

Zauberspiegel: What were the rules, standards and presettings for the authors? How were the characters supposed to be designed?
Otto Penzler: The rules were simple: Keep the story moving. Everything else was secondary. Good guys were very good; bad guys were very bad. Readers were never ambivalent about whom they should root for. The characters were designed to please the readers of the magazines, mostly young men and blue collar working men. Women rarely wrote for the pulps and there were rarely important female characters. The women were generally girls who needed to be saved, or loyal secretaries, wives and girlfriends of the heroes, though there were plenty of villainous women, too. And women seldom read the mystery, hero or science fiction pulps; they had romance pulps, which they bought in enormous quantities.

Zauberspiegel: What is the difference between the mystery stories in pulps and today?
Otto Penzler: Mystery stories today have far more carefully created characters, there is greater emphasis on the style of writing, and less interest in moving the action along briskly. Today's mysteries, at least the very good ones, are serious novels in which a crime happens to take place. None of this applied to the pulp era, with the very rare exception of the few greats who could do it all, like Hammett and .

Zauberspiegel: What is the difference between pulps in the States and the ones in before and after WWI?
Otto Penzler: I know nothing about pulps in and never knew there were any. In fact, I don't believe there were.

Zauberspiegel: What is the difference between pulps in the States and the ones in before and after WWI?
Otto Penzler: As noted above, the most significant change in contemporary mystery fiction is a greater attempt at being realistic. Characters are fully developed, and bad people commit murders. Today, it mostly seems silly for a vicar or a kindly grandmother to commit murders. Those books were mostly created for the puzzle, which has all but vanished from today's detective stories.

Zauberspiegel: How would you describe the development in mystery/detective stories during the last two or three decades?
Otto Penzler: As noted above, the most significant change in contemporary mystery fiction is a greater attempt at being realistic. Characters are fully developed, and bad people commit murders. Today, it mostly seems silly for a vicar or a kindly grandmother to commit murders. Those books were mostly created for the puzzle, which has all but vanished from today's detective  stories.

Zauberspiegel: Do blockbusters by authors like Grisham or Cornwell support or damage the genre of detective stories?
Otto Penzler: The mega-bestsellers are wonderful for the mystery genre, as publishers have seen how successful mystery writers can be, so they are always looking for the next one that can break out, making a big market for new mystery writers. Also, they sell a lot of books, making a lot of money for publishers, without which they could not survive.

Zauberspiegel: The characters in present-day detective/mystery stories often end up as beaming victors  no matter how hopeless the situation may be. In pulps they were rather the survivors, the ones who hardly made it. What, in your eyes, are the reasons for this?
Otto Penzler: I don't agree that there was a difference. The pulp detectives may have got beat up, shot and been accused of committing crimes, but they were heroes who always emerged victorious. There is little difference between Sam Spade, Philip Marlowe and Race Williams of the pulps and Spenser, Jack Reacher and Matt Scudder of today.

Zauberspiegel: You recommend authors like Robert Crais, James Crumley and of course Elmore Leonard  all of them are authors that are on the way to become modern classics. Yet they are (apart from Leonard) not the really big sellers. Is this your way of expressing who supports the genre and where there is a dawning of a renewal?
Otto Penzler: Whenever I can, I support the best writers, as they are my heroes. But I never support someone, or advocate them, unless I truly admire their work. This is difficult, sometimes, because I have many writer friends whose work I don't support because, while it may be excellent, it is not a kind of writing that I admire. However, you should know that, in , Robert Crais is a huge bestseller. Why James Crumley hasn't sold better defeats me, and I think American mystery readers should be ashamed of themselves for not loving him more. He is the best. Period.

Zauberspiegel: What do you think: What kind of detective, what kind of villain will be the future of detective stories? To what extent will thriller and the classical detective stories mix?
Otto Penzler: The detective of the future will reflect society at large, as he always has, though he often represents the best that society has to offer, being more honest, more fearless, more loyal and more competent than most of the people who read of their adventures. As more and more of society becomes overly accepting of moral relativism, egotism and banality, I suspect the detectives will become more that way, too.

Zauberspiegel: What is  to your mind  the ideal contemporary detective story?
Otto Penzler: No one gets it right more than Michael Connelly, though Crais rivals him. Both writers have created memorable characters, write with a beautiful prose style, construct tight plots with satisfying solutions based on reason and inevitability, rather than being pulled out of the air. Some of my favorite writers, like Robert B. Parker and Elmore Leonard, are more interested in characterization and dialogue, not so much in constructing plots. Crumley's plots are so complex that I've never known what was going on with just one reading, though he is one of the few writers I enjoy re-reading because his prose is pure poetry, as is also true of Thomas H. Cook, John Harvey and Charles McCarry.