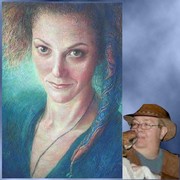 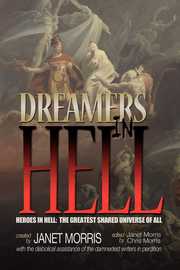 Zauberspiegel: So first, who are you?
Shebat Legion: I write under the pen name of Shebat Legion. I took the name, "Shebat" in homage to the author, Janet Morris at the age of fifteen after reading Dream Dancer. I added "Legion" for personal reasons. I write because I love to write, and many times must write. I often attribute this to being bitten by a Muse.

Zauberspiegel: So you could say that Janet is part of the inspiration for your writing career?
Shebat Legion: Absolutely.

Zauberspiegel: Can you describe running into Janet for the first time?
Shebat Legion: I have long been a fan of Janet Morris. One of the things Facebook does is it asks you what books you like, of course I selected hers. There are fan pages, as well as author pages for many popular books. I found one of Janet's, and well, my chat posting often reflects what I am saying or doing at the time and I posted, "SQUEEEEEE!"
I was thanked politely and posted back in what surely must have created a record for the gushiest, fan girl post about how much I adore Janet Morris. I didn't know that I was talking to Janet Morris herself. Later on she told me, and after I finished blushing, and we spoke at great length as to why I took the pen name, Shebat, after a character she created, and Janet invited me to join the Hellions writer's group.

Zauberspiegel: So you were really excited to be a Hellion?
Shebat Legion: I was beyond excited to be invited into the Hellions writing group, as well as being a bit overwhelmed

Zauberspiegel: More SQUEEEEEE?
Shebat Legion: No. I was embarrassed by the SQUEEEEEE, actually

Zauberspiegel: So, where did your mind take you when you heard the concept for Dreamers?
Shebat Legion: It led me to Ophelia immediately. As stories often do, it appeared with a beginning, a middle and an end.

Zauberspiegel: Who is Ophelia?
Shebat Legion: In Shakespeare's Hamlet, Ophelia is the protagonist's love interest and a doomed character. She eventually commits suicide which meets the conditions for going to Hell, in the Hell shared universe.

Zauberspiegel: So Ophelia's in Hell. What made her YOUR character, and how did she fit the theme of Dreamers?
Shebat Legion: As a young adult, I spent time as an actress and a model. While I never had the chance to portray Ophelia, I've always been interested in her. I have seen many variations of Ophelia, both on stage and on film. This was my chance to portray my personal vision of Ophelia.
As to how Ophelia fits into Dreamer's In Hell, specifically, Ophelia is of course, a fictional character. She is someone else's dream. Which became MY dream and then became a different sort of dream again.

Zauberspiegel: How excited were you when you found out your story had been accepted?
Shebat Legion: I was extremely excited to be included in Dreamer's In Hell. The Heroes in Hell series is exciting and thought provoking, and has been contributed to by many skilled authors over the course of many years. I am honoured to be in such company. I was also shocked. Janet Morris liked something of mine and wanted to include it in her anthology? Wow.

Zauberspiegel: Now, about Vampire Therapy, the series you were working on before you met Janet, what inspired you to start writing it?
Shebat Legion: I am a long time fan of paranormal fiction, Vampires in particular. In the last two years, I have joined many writing groups, and came across the works of Rue Volley, an author who has the refreshing attitude of throwing rules out the window. This gave me the courage, and I gave myself  permission to go ahead and break the rules as well.
I gave much thought to how "My" Vampires should be and what would make them different.
As the characters presented themselves to me, I began to see that what makes them different, is that, the characters themselves are unique to themselves, far from perfect. All beings are different. Human or Vampire.

Zauberspiegel: Some being more different than others.
Shebat Legion:  Exactly.

Zauberspiegel:  How did you find your main character, Lily?
Shebat Legion: My main character is not Lilly, although many people think that she is, since she is predominantly displayed in the Chronicles. The Chronicles are prequel short stories that introduce the setting for the first full length novel of "Vampire Therapy" called, "Book One: Jackson and Eva."
The main character of Vampire Therapy et al is up to the reader to decide. There are many characters to choose from.
"Book One: Jackson and Eva" is nearly complete, and should be to Hot Ink Press shortly.

Zauberspiegel:  What else have you been doing?
Shebat Legion: I've also sold two short stories to John Manning at Fantom Enterprises. The first is The Cookie Lottery, which is in the upcoming Terror by Gaslight anthology, and the second is The Shape of the Stone which is in the upcoming Discontinuim anthology. Fantom's books are also published by Perseid Press, the publisher of Dreamers in Hell. Perseid is owned by Janet and Chris Morris.

Zauberspiegel:  Thanks for taking the time to speak to me.
In closing, I should mention that I met Shebat Legion in the Hellions, and we were happy to find we lived near each other, because it's hard for writers to talk to non-writers about writing. I was at her house the day she got her acceptance for Dreamers in Hell, and she was so happy, I don't think her feet touched the ground the entire time I was there!