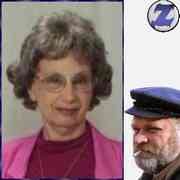 In the good old Eighties I read »House of Zeor« und »Unto Zeor, Forever«. These books were published in Germany by the publisher Moewig in two various editions. Then the German publications stoppend.
On Facebook I met Jacqueline Lichtenberg (again) and read that the Sime~Gen-Series (which the two books from Moewig belonged to) hadn't ended. Just the opposite. - This was something we had to challenge ... and Jacqueline Lichtenberg provided her help.

Zauberspiegel: Moin Jaqueline. Could you please introduce you to our - particulary the German - readers?
Jacqueline Lichtenberg:  On the Twitter #scifichat I usually introduce myself as a widely published professional writer of science fiction/fantasy/romance/ genre mixtures & a professional SF/F Reviewer.  But I will bring up other credentials depending on the topic at hand.  On various social networking "profiles" that want a 100 word biography I generally put the following:
Jacqueline Lichtenberg is creator of the Sime~Gen Universe, primary author of Star Trek Lives!, founder of the Star Trek Welcommittee, creator of the term Intimate Adventure, winner of the Galaxy Award for Spirituality in Science Fiction and one of the first Romantic Times Awards for Best Science Fiction Novel.  Her work is now in e-book form, audio-dramatization and on XM Satellite Radio.  She has been sf/f reviewer for The Monthly Aspectarian for 16 years.  With Professor Jean Lorrah, she teaches sf/f writing online via Tarot and Astrology.  Currently, new and old Sime~Gen plus other novels are in e-book, Kindle, and print from Wildside Press.  See Amazon.com/simegen-20 Bio and Bibliography at Simegen.com or jacquelinelichtenberg.com
But some profiles want more, or publications often want a more personal slant, so I put something like the following:
ABOUT ME:
I became hooked on SF in 6th grade when my mother snuck me a book from the "adult" library.  I fought with my High School English teachers about the superiority of the Lensman Series and E. E. Smith's "writing" over that of the "Classics" we were forced to read.  I avoided all English courses in college because I was determined to become an SF writer -- so like many SF writers I knew, I majored in Chemistry.  I've been a member of the N3F since 7th grade, and a member of SFWA since 1969. You'll find me on Linkedin.com, Facebook, digg.com, livejournal, blogspot, Google+ and Goodreads.com, Youtube.com/SimeGen plus a few other social networking sites.
INTERESTS: From the forefront of nano-technology to the depths of archeology.  From the business of the fiction delivery system to the psychology of audience response.  From the farflung limits of Kabalah to the most personal spiritual experiences.  Jacqueline Lichtenberg novels are known for combining action, adventure, romance, and philosophy into a seamless whole.

Part 2 of this follows April, 22nd