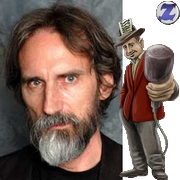 Without a doubt John Howe belongs to the first row of Tolkien illustrators. Along with Alan Lee, he was "conceptual designer" for Peter Jackson's film version of 'Lord of the Rings'. He is also in the making of 'The Hobbit'.
But to reduce him  solely for illustrating Tolkien and Middle-earth would mean to neglect a huge part of the artist and person John Howe. There is still a lot to discover, not only the fact that he is an active member of an association that wants the Middle Ages  to come alive.

In addition, his book "Lost Worlds" was just published in Germany by Arena. A wonderful reason for us to ask him some questions. We caught him just before he traveled to New Zealand to work on the Hobbit with del Toro and Jackson.

Zauberspiegel: Very likely all questions concerning Tolkien and Howe have already been asked. Therefore we want only to ask two or three questions on that subject. Among the many - sometimes excellent - Tolkien illustrators, some would probably have been capable and been able to be "conceptual designer" for the movies. How did you get to get the Job?
John Howe: I really dont know! We simply got a phone call one day. I believe that during the time Peter Jackson and his co-scenarists were tackling the herculean task of refining a thousand-page novel into a readable script, they has covered the walls with all the Lord of the Rings artwork they could find. I think they simply became so accustomed to seeing Alan Lees and my work that they decided to have us develop artwork for the movies.

Zauberspiegel: What does a conceptual designer do? Have you also tried to get near to Tolkien's drafts of Middle-earth, since he has left behind many descriptions and illustrations?
John Howe:  A conceptual designer simply puts the situations described in the script into images. Much of the work involved designing how everything that needed to be built would look. We were also involved with weapons, armour and creatures to a degree. Tolkiens descriptions were simultaneously very useful and allowed a good deal of freedom, since they were not taken in a restrictive sense. Tolkien often describe not a thing itself, but the emotions of the character when looking at that thing. This leaves a good deal of freedom to work. Readers of the Lord of the Rings are, in a way assumed to be familiar with history and art. When Tolkien describes Edoras, you know he is referring to Heorot, thus his description can be more imaginative than explicative, as he knows our minds are filling in the gaps. Tolkiens illustrations are excellent sources of information, but not necessarily of inspiration.

Zauberspiegel: And one last question on Howe and Tolkien: What is the collaboration with Peter Jackson and now del Toro (on the Hobbit) like?
John Howe: I think they very much enjoy working with each other. They share a huge number of common interests and great enthusiasm for the genre. They are also both true admirers of Tolkien. Guillermo is very good fun to work with, his enthusiasm and energy are quite contagious.

Zauberspiegel: In Germany your book "Lost Worlds" has just been published by Arena publishers. In this book you illustrate myths and legends. What is this book about?
John Howe: The idea central to the book was to choose 24  worlds which either have either physically disappeared or become culturally removed from our preoccupations, and treat them in the same mammer. We chose twelve real civilizations, and twelve myth cycles, so the book ranges from Atlantics and Camelot to Cahokia and Mohenjo-Daro.
Personally it was incredibly rewarding, since the research was quite thorough and fascinating. (It may be a book for young people, and be unable to go into great depth on any one subject, but you still must try to get your facts right.) I was fortunate to have the help of a real historian, Neil Phillip, who did his best to keep me on track, make sure I missed nothing essential and check my texts at the end to make sure nothing terribly wrong slipped through.

Zauberspiegel: As it seems, Lost Worlds covers a wide range and different cultural backgrounds. Where does the artist gets inspiration for such an endeavour? And how does he address the subject?
John Howe: There is a difference between information and inspiration, the first, information, constitutes the (hopefully) solid foundation upon which imagination can build an image. Without the latter, and image would not tell a story, but simply be an exposition of details, and without the former, the image would not have any historical validity.

Zauberspiegel: Why did you address the subject of myths and legends? What do myths and legends mean to you? Would you call yourself a spiritual person?
John Howe: Yes, I would like to consider myself a spiritual person, especially if I was able to understand what that really means! I do attach a great value to myth and legend. The stories we now call myth or legend are stories of divine beings, once considered sacred, but that become folklore once the link of meaning is broken. (Religious legend, on the other hand, is about divine beings but trivial stories.) It is clear, however, that the deeper meanings, beyond world creation, divine retribution and twists of fate, are ones that have not changed since the stories were themselves created.

Zauberspiegel: You are active in medieval reenactment. Why this passion?
John Howe: I very much enjoy serious medieval reenactment, where a good deal of effort is spent to make things are historically accurate as possible. Its a very artistic undertaking, as information is not always available, and sources must be interpreted. Visually it is stunning at times, and it does provide a very helpful body of knowledge for illustrating  knowing how to wear a cloak, carry a sword, what helmet straps are like, etc., etc.

Zauberspiegel: During the last few years medieval markets (in Germany) have experienced a real boom. This was accompanied by a growing commercialization. Authentic reenactment of experimental Middle Age life is often left behind in favour of Hollywood-like productions. What position do you have? Where is it possible to meet you participating in an Reenactment-meeting?
John Howe: The members of the Companie are all amateurs, who participate out of interest for the period portrayed. When the undertaking becomes professional, and one has to make a living off it, it is hard to remain authentic. I no longer have any real position in the Companie, since Ill be away here in New Zealand for a while. I hope to get back into reenactment when weve finally gotten There and Back Again.

Zauberspiegel: Does reenactment have an influence on the artist Howe? Do you find inspiration there?
John Howe: Yes, of course, it is very inspirational, and constitutes a true mine of information. When the public has gone for the day, and the Companie can relax a bit, it is very much like being inside a painting by Memling. The Companie does have a web site: www.companie-of-st-george.ch. If I had a LOT more spare time, I would love to create a fantasy reeactment group, but to the same standards at a historical one.

Zauberspiegel: What are your next plans as an artist?
John Howe: I have a couple of book projects that I am very much looking forward to starting in on. I hope to accomplish the writing for them while working on the Hobbit and get layouts and sketches done. I believe there are also a couple of exhibitions planned.