...with Gordon Van Gelder on the Magazine of Fantasy and Science Fiction (1) 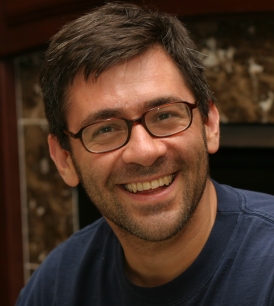 ... with Gordon Van Gelder on the Magazine of Fantasy and Science Fiction (Part 1)

For an impressive period of 37 years one of the most successful bookseries of anthologies from foreign-language-magazines of fantasy and science fiction was published by the Heyne-Verlag in Munich, with a total of 101 issues. The German translation of selected shortstories and novellas from the American Magazine of Fantasy & Science Fiction accompanied and moulded at least two - maybe three - generations of German readers of fantasy and sciene fiction under the aegis of of five different editors.

The US-original will celebrate its 60th anniversary in 2009 and can be found sold every month (11 times a year with a double-sized edition in October/November) at US-newsstands, and wins HUGO- and NEBULA-awards on a regular basis.

The man behind the magazine is Gordon Van Gelder, born in New York in 1966, who had been editor since the June 1997 issue, and became publisher a few years thereupon. On the occasion of winning the HUGO-AWARD 2007 in the category "Best Professional Editor: Short Form", awarded for his work for the Magazin of Fantasy & Science Fiction, we had the chance to do this interview with Gordon van Gelder early March 2008 by e-mail. 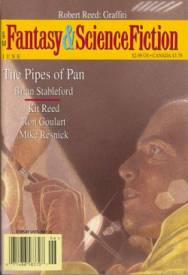 Zauberspiegel: Mr. Van Gelder, to start things off, tell us a little about your own first contact with F&SF as a reader.
Gordon Van Gelder:: I started reading SF when I was about 13 and quickly found F&SF and ASIMOV'S were the magazines I liked the most.  This was in the early 1980s, so the Ed Ferman era of F&SF was definitely the one that made the biggest impression on me.  I sold a story to Terry Carr when I was 14 or 15 and I used the $35 payment to buy a three-year subscription to F&SF.

Zauberspiegel: How and why did you become an editor, and how and why eventually the editor of F&SF? I recall reading (in an interview or maybe one of your rare editorials) that you were advised to search deep inside yourself, if the wish to write would not perhaps be greater than the one to edit, or one day become so. Never felt an itch in your fingers to write more yourself? Are you really Gordon Van Baggins, and is writing the using of the One Ring?
Gordon Van Gelder:: Editing is something I've done since I was a teen---I edited our high school literary magazine for two years, and then in college I helped found and edit a science fiction magazine on campus.  But what really got me into the business was when I landed a summer internship with Bluejay Books in 1986.  Jim Frenkel (the publisher of Bluejay) very generously spent a lot of time teaching me the business.  When I graduated from college, I looked for editorial work and found a job at St. Martin's Press pretty quickly.
I became the editor of F&SF because when Kris Rusch resigned in '96, Ed Ferman called me to see if I'd be interested in the job.  I was one of several people who interviewed for the position and he wound up giving it to me .  During the interview, he asked me if I wanted to write---after his experiences with Avram Davidson and with Kris, he felt it's a mistake to hire an editor whose primary interest is in writing.  (I think that's one of the main reasons he gave me the job.)  Do I have any interest in writing?  Yes, there are some stories I'd like to tell.  But I don't ever want to try to turn writing into my profession.  I read a great comment from an editor in the 1920s who said that an editor's approach to writing should be like a bartender's approach to drinking: it should be done sparingly and only on one's own time.

Zauberspiegel: Imagine you or maybe your predecessors come across a "lost" submission by a long deceased, legendary author from the past of F&SF. What would you have that author's name be?
Gordon Van Gelder:: Well, that's sort of an unfair question, because I *have* received submissions of stories that were found in authors' files.  We published Theodore Sturgeon's "New York Vignette" in 1999 and an Avram Davidson story before that.  And unfortunately I've read a few "lost" stories that were not great treasures.  But if I had to name one author, I'd love to find a lost Alfred Bester story from the early '50s.

Zauberspiegel: It's been over a decade now that you took over editorial reins from Kristine Kathryn Rusch. In hindsight, if you knew then all you know now, what (if anything) would you have done differently? Recall the single greatest moment or incident, and the single worst?
Gordon Van Gelder:: The list of things I would have done differently is too long for me to list, starting with things I said in 1996 when the news got out that I was replacing Kris, and going up through yesterday.  Running a magazine is a continual learning process.
Right now, I can't think of a greatest moment, but the worst was probably in 2001 when I opened up the box of copies of the April issue and discovered that the magazine had printed without any periods.  I knew I'd laugh about it later, but at the time, I didn't find it funny at all.

Zauberspiegel: What does your 2007 Hugo mean to you, and what do you think of the splitting of the "Professional Editor" category into two categories, one "Short Form", and one "Long Form"?
Gordon Van Gelder:: I'm grateful to everyone who voted for me for the Hugo, but to be honest, the award doesn't mean much to me.  It's a nice honor, but I don't particularly like the idea of competition among editors.  I mean, Stan Schmidt does stuff with ANALOG that I could never do but he doesn't get Hugo recognition for it---am I supposed to think I'm a better editor than Stan because of the award?  I hope not, because I don't think I'm a better editor than Stan (or most of the other editors in this business, for that matter).
As for splitting the Best Editor award, well, it's nice to honor book editors (I was one for a long time and I know the honors are scarce), but I hate seeing more awards added to the field.  Isn't it enough that we get to work on books and magazines that we love?

Zauberspiegel: How relevant to sales of your (or indeed any) magazine are won Hugos and Nebulas really? (Be it for editing or writing.)
Gordon Van Gelder:: From what I've been able to measure, the awards don't make a significant increase in sales.  The only exception to that is with novels---when they win awards like the Hugo, they usually get a nice increase in sales, especially in international sales. 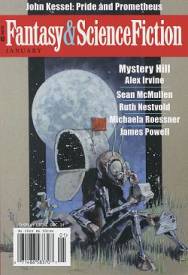 Zauberspiegel: A few years after you became editor you also became publisher of F&SF. The tasks of which of these two fields are more demanding  editing or publishing? What percentage of a day's work goes into which?
Gordon Van Gelder:: On balance, I'd say the publishing job is more demanding.  Running a business is harder than editing a magazine.
Percentages?  Today was about 65% publisher, 35% editor.  Yesterday was closer to 50/50.  Overall, I'd guess the monthly average is about 60% publisher, 40% editor.

Zauberspiegel: F&SF has a long history of publishing first-time authors. The very first issue, Fall 1949, already had an author's 1st story, and all editors since then have brought more 1sts in a year's output than some other magazines have done in a decade's. Kristine Kathryn Rusch even put together a debuts-only issue once. Your personal take on the philosophy behind this?
Gordon Van Gelder:: New writers are vital to the magazine, and working with them is one of the greatest pleasures I get in running F&SF.  Getting to help writers like Charlie Finlay, M. Rickert, Laird Barron, and Paolo Bacigalupi get their careers going has been as much fun for me as it has been for readers who like their work.  More recently, we've run first sales by Ann Miller, S. L. Gilbow, and I've got a couple in inventory.

Continued in part two of the interview.

#1 Sand by Hugh Howey audiobook review 2014-04-09 21:17
" Clothilde laughed as she removed her space helmet. The fiction books can be classified into comic, fantasy novels, romance novels, thrillers, science fiction, classic fiction, horror etc. Science fiction promises that our imaginations are prolific creators that can give us the means to make life be as we want it to be.
Kommentarliste aktualisieren