Interview with the Devil (the introductory story in Lawyers in Hell) 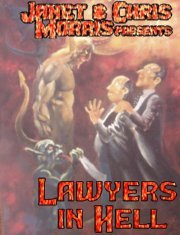 Interview with the Devil
(the introductory story in Lawyers in Hell)
Go to Heaven for the climate, Hell for the company.
 Mark Twain
Satan was fuming, literally, when I was escorted into his office on the top floor of New Hells Hall of Injustice by Marilyn Monroe in a tight red knit dress.  Aside from the devil and his desk, the huge place was empty from corbeled, cobwebby rafters to filthy marble floor.  The whole office reeked of smoke.  Wisps of gray smoke curled upward from his big black leathery wings, his wide maw, and leaked between his glittering fangs.  His yellow eyes burned into whatever soul I have left, and hurt. 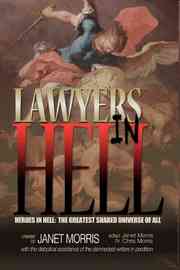 That will be all, Marilyn, said Satan in a cultured voice, taking the list between his diamond claws.  The list ignited as he held it, curling to char in his hand.

Marilyn brushed past me and swished her way out of the office as if I didnt exist.  There was no chair for me.  I had to stand.  On my belt was my mini audio/video recorder; I tapped it.  Now we were recording video, against all the rules.  How few among the damned souls sent to hell had ever seen the notorious devil, up close and personal?  What I did, I did as a public service.

Mephistopheles sat on his desk, not behind it  looking at my crotch, it seemed.  His tail lashed.  He crossed powerful arms and said, Safire.  I do like the name.  Just who were you, again?  Before you came here to my domain?

I was Richard Nixons speechwriter.  He was an American president, you might recall.  Nattering nabobs of negativism:  that was my work.  I wrote that line, sir  for Nixons vice president.  Later, of course, I was a columnist for the New York Times.  And now, for the New Hell Times.

What does YSM stand for  Sire?  It was difficult to call anyone sire, but I have interviewed my share of kings and queens and self-styled tyrants.  And now, the most dastardly overlord of them all.

Your Satanic Majesty.  Can we get to your questions?  We have windows to replace in here today.

HSM was using either the editorial we, or the royal we, I didnt quite dare ask which one:  I might be the most famous etymologist of the twentieth century, but my interlocutor is the devil (from the Middle English devel, from Old English dēofol, an early Germanic borrowing from the Latin diabolus, in turn borrowed from Ancient Greek diábolos).  Sire, Ive heard those windows always need replacing.  Howard Hughes built this building from Frank Lloyd Wrights design, correct?  My readers want to know details like that:  what your  life  is like.

Immaterial.  No unapproved questions.  Get on with it, Safire, or Ill call in some demons to string you from my flagpole and eat your liver for a few hundred years.  The devil stretched out his arms and unfurled his black wings.  His form suddenly shimmered and shifted and a handsome, steely-eyed man with brush-cut gray hair in a pinstriped suit sat before me.  The smell of smoke abated.

Yes, all right.  Well, this interview will be available on Gurgle and every other browser, so your subjects can read it on their phones and PDAs.  But no video or audio, as your staff stipulated:  just print.  Im required to tell you that.  And that Im recording this conversation  only for accuracy, of course.

Read it on their what?

The devil reached behind him and pulled something out of his nether regions:  a black-furred winged thing, part cat, part bat, with shiny white fangs.  It yowled, swiped at the Father of Lies, sprang to the floor and launched itself straight at me.

Satan lifted a finger and pointed at the leaping bat/cat/leather-winged thing.  It burst into a ball of flames in midair and disappeared, leaving only a few ashes drifting to the floor.

Michael doesnt like you.  One wonders why.  Steely eyes looked me up and down once more.  Your questions, Safire.  I have a hell of a lot to do.

Yes, well.  Ah ... Prince of Darkness, will you please tell me what it means to the citizens of New Hell that you and all the other lords of hell are being audited by emissaries from on high, coming here to determine whether or not injustice is being fairly dispensed?

Administered.  Not dispensed, Satan corrected me.  It means that some in the manifold hells of creation have existences far too cushy.  That some of my Devils Children and my Insecurity Service have been lax.  That Machiavelli and Nero and Saddam Hussein and Caligula and Sartre and the rest of those perverts will get whats coming to them.  That all the hells are about to become more hellish.

I see.  And is there any truth to the rumors that there will be new appeals possible, hearings for those damned who feel theyre in hell unjustly?

Unjustly?  You jest.  The devil waved a hand toward me and my mini-recorder pinged insistently and began to overheat.  I turned it off, foiled in my clever plan to podcast video of Satan in the flesh.

Sire, what about the story that theres a Get Out of Hell Free Card here somewhere, if one can just find it?

No, no; thats fine, Sire, I soothed.  Next question:  What about the relics:  the shrouds and chalices and spears and vials of holy water?  Are they real?  Can they save a soul?  And if theyre not, what is your administration going to do about those perpetrating theses hoaxes on so many gullible souls?  Weve heard the money made on those supposed relics goes straight into your administrations coffers.

I am not a crook, said the devil, standing abruptly and shimmering again.

Id heard those words before.  Id written those words before.  Yes, Sire, but Im certain our readers are anxious to learn how your government proposes to deal with these supposed relics and with the auditors coming from on high.  Can you tell us about the auditors?  And what, if any, charges have been lodged against you or your various departments?  Who will be the counsels defending your administration from accusations of incompetence?

Defending?  Incompetence?  Now the devil changed his shape:  gone was the handsome bureaucrat.  In its place came no winged demonic form:  Satan was now a spinning whirlwind of inky blackness that tugged at me, as if it would suck me within itself.  If you die in hell, you revive in the Mortuary, on the Undertakers table, usually worse off than youd been before.  I need no defense, came HSMs voice, ringing like hells bells.  I am lord of the greatest hell in human history.

Yes, of course you dont, YSM, I said hurriedly.  But we have heard that punishments will be meted out to the guilty and innocent alike by these auditors from the higher heavens.

From the lightless void came Satans voice again:  In hell, Safire, all punishments fit the sins.

You mean punishments such as George Washington having endless dental implants that dont heal and infect his whole system?

Never mind Washington.  He got off easy.  Cows teeth and hippopotamus ivory dentures should have been good enough for him.  The spinning black vortex was expanding, the voice ringing excruciatingly in my ears.  I know who you are now, what youre trying to do.  You have your interview.  And you shall have a new punishment, more appropriate to your crimes.  Your life here has been far too easy:  you and your subscribers need to learn a thing or two about penance.

The black maw whirled around me and sucked me up and put me down far from the devils office, far from New Hell itself, among the cactus and the tumbleweeds, in this tattoo parlor from which Im logging my report.  Ill be here quite some time, the Hells Angels tell me, strapped to this table until the entire Constitution of the United States, including all amendments, is inked into my skin.

to the overview - to the writers commentary