BLACK STUMP RIDGE
Excerpt from the Book
Suddenly, Charlies head jerked up.  He turned this way and that as he tried to locate the noise.  He strained his senses.  There! It sounded strange, and yet, familiar.  His heart pounded in his chest as he struggled to hear.  There it was again.  Fiddle music from somewhere to his right.  He turned his head.  The music faded.  He strained but heard nothing more.  Just as he thought hed imagined it he heard it again as if floating on the barely tangible breeze.  It was definitely fiddle music.  The notes came fast.  The style was familiar.  Charlie searched his memory.  Breakdown! Thats what they called this kind of music.  It was a breakdown. 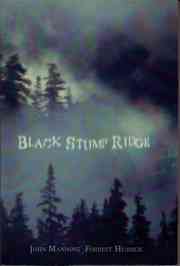 Relief washed over him.  He didnt really care what kind of music it was.  Music meant people and people meant shelter from the cold and dark.  He shifted the shotgun from his right shoulder to his left.  Holding the tarp tightly under his right armpit, he struck out once more, this time following the elusive music.

Before long, the ground sloped upward.  With each step it grew steeper until Charlie struggled to put one foot after the next.  Each time he stopped to rest, however, the music sounded louder, closer, and, somehow, more insistent.  He pushed onward and upward.  The music played faster.  The tune grew ever more compelling.  Branches scratched Charlies face and hands but he ignored them as the music pulled him onward.  Thorny vines tore at his clothing and added their marks to his exposed flesh.  Just when he felt he could go no further he stumbled into a clearing.  The music grew suddenly louder, almost deafening, and the stopped.  The ensuing silence seemed louder than the elusive fiddle.

Charlie looked around.  Ruined buildings filled the clearing.  Somehow, despite having only starlight for illumination, he could see the partial walls clearly.  Pale phosphorescence outlined each crumbling edifice.  Slowly, as if in a dream, he shuffled into the clearing until he stood among the ruins.  To his right a path traced an irregular course through the rubble.  He turned.  The path led upward.  Charlie started walking, following it like a sleepwalker.  The music had to come from somewhere.  Perhaps the path led to the source.

A dark, irregular shape loomed before him.  The path branched to pass on either side of the obstacle.  Charlie moved closer.  It was a stump.  The jagged top, slightly higher than Charlies own six feet, pointed at the sky like some giant fist giving the finger to God.  Charlie shook his head.  Where had that blasphemous thought come from?

He reached out and touched it and then drew back his hand.  Instead of wood, his fingers touched stone.  Petrified wood, perhaps? He walked around the stump.  Behind it, a long narrow hole lay open to the sky.  Charlie looked down into it but kept his distance.  It was bad enough to be lost.  He had no intention of falling into a hole and breaking his leg.  Or, worse, his neck.

He turned and followed the path further up the mountain.  Blackness deeper than the nights darkness loomed before him.  He stopped in front of it.  The rectangular-shaped darkness rose about two feet above his head and stretched a few feet on either side of him.  He stretched out his left arm and leaned forward until his fingers touched the side.  He felt wood this time  old wood, rough and splintery to the touch.  He stepped closer, exploring it with his fingertips.  It was a beam of some sort  very thick and solid.  Suddenly, he understood.  This had to be the deserted mine that the storekeeper had mentioned; the one he told them to stay away from.  He yanked his hand back and looked around as if expecting  what? A nuns yardstick, perhaps? He shook his head again.  Where were these religious and sacrilegious thoughts coming from? Hed not thought of nuns or their punishments for more than thirty years.

A smell floated to him from the yawning blackness.  His nostrils flared as he tried to identify the elusive scent.  It grew thicker.  He frowned.  As it grew stronger, Charlie grimaced.  He smelled decay, the stench of a tidal flat during low tide on a hot day.  The odor reached into his nose and mouth.  He gagged as his gorge rose.  He tried not to throw up.

He knew that voice; knew it well.  It didnt belong here.  It belonged far away from this frigid mountainside.

He turned.  He tried to resist, but his feet and his body had minds of their own.  There she stood, less than twenty feet away.  Her hair cascaded down either side of her head.  Her eyes were wide and staring directly at him.  Her mouth was set in the pouty smile he knew all too well.  In spite of the cold she wore a diaphanous negligee.  The gauzy fabric shifted on the wind.  First it revealed her upturned breasts; then hid them.

She raised her arms, opened them to him in welcome.  Why did you leave me like that, Charlie?

Charlie felt the shotguns sling slide down his arm.  The weapon clattered among the stones.  The tarpaulin, too, fell to the rocky soil beside his feet.

Whats the matter, Charlie? Arent you glad to see me?

Janines face registered mock surprise as her hands made an exaggerated show of checking her body.

Really, Charlie? I feel fine.  She took another step toward him.  You dont look like you feel so good, though.

Charlies hand rose to the zipper on his down jacket.  Slowly, without taking his eyes off of the apparition in front of him, he eased the zipper halfway down and slipped his hand inside.

Janine nodded.  Yes, Charlie, you did.  Her voice sounded sad even as the expression in her eyes hardened.  That really hurt my feelings, you know.

How can you be here? Charlies hand found the butt of the pistol nestled inside the shoulder holster.  With his thumb, he unsnapped the strap and eased the safety off.

She tilted her head to one side as if thinking.  Very good question, Charlie.

He pulled the gun free of the holster.  The hammer caught, briefly, and then the pistol was away from the coat.  He raised it, pointed at his dead wife, and thumbed back the hammer.

He pulled the trigger.  The big revolver thundered.  The blast echoed in the mineshaft behind him.  He heard it reverberate among the surrounding hills.  A gout of flame stretched toward Janine, temporarily blinding him.

His night vision returned.  He saw her walk toward him, unharmed.  Her right arm drew back.  She swung it sideways in an arc across her body.  It moved impossibly fast.  It struck his extended arm just above the wrist.  Pain exploded white hot inside his brain.

He dropped to his knees.  From somewhere he heard her say, Sorry, Charlie.

It barely registered.  All he could do was stare at the remains of his arm  at the blood pulsing from the jagged stump where once his wrist and hand had been.

Suddenly, she stood in front of him.  Her gown gently brushed him.  He looked up.  She smiled down at him.  The smile grew.  Her lips parted.  The smile grew larger.  As her face slowly descended her mouth opened.  Her jaw parted still wider  impossibly wide.  Jagged teeth lined crimson gums as her mouth descended.  Im so hungry, Charlie.  I think Ill just eat you right up.

His last thought as his head disappeared inside of her mouth was, Where did you get all those teeth?