THE LION OF CAIRO (An Excerpt from the novel)

THE LION OF CAIRO
(An Excerpt from the novel)
Gamal cursed under his breath as the one-eyed beggar, arm in arm with an older man hed met, left the teeming Qasaba behind.  Side streets meant a change in tactics.  He slowed their pace, allowed their interval to widen, and prayed to Allah for relief from the sweat stinging his swollen eye.  Though he would have preferred to stay behind and cover the caravanserai, the Heretic had set him a different task: Follow whoever leaves and mark well their destination.  He did as ordered.  But who was the old man and where were the two of them headed?  To meet the Emir of the Knife, perhaps?  Unless the old man was the storied Emir . . .?

Gamal shook his head.  Dont be a fool!  Focus, and be vigilant! 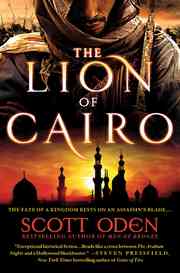 Heading west, flights of shallow stairsnever more than a dozencarried the cobbled street down into a hollow older than the city itself.  Plaster flaked from stone foundations to reveal ancient writing, pictures scored by the hands of long-dead Egyptians.  Here were the mausoleums of Cairos earliest settlers: squat buildings with crenellated facades and keel-arch doors, some with inlaid plaques detailing the lineage of those buried within and others carved with bits of verse older than the Prophet.  Yet, while the dead lay in their crypts, the living made their homes among them, for most of the mausoleums exhibited signs of life, from the sounds of squealing children and muttered voices to freshly-washed laundry hanging from lines strung between the tombs.  The din of the Qasaba was but a faint echo.

Ahead, Gamals quarry ducked into an alley.  He resisted the urge to run after them, to keep them in sight at all costs.  Patience.  That was the quality of the hunter and Gamal reckoned himself one of the best.  He reached the alley, rounded the corner . . . and stopped.

The way ahead was empty.

Mother of bitches!  He frowned, looked about.  Willow trees overhung the alley from a rooftop garden; the narrow way ran a short distance before dead-ending against a wall of dull gray stone.  Graffiti scrawled in charcoal declared it to be Fumm al-Gahannamthe Mouth of Hell.  Gamal shivered; he dropped his hand to the hilt of his knife as he moved deeper into the alley.  Narrow fissures, some hung with wooden doors, led off into the heart of this city of the dead.  He shivered again and cursed.  Only in Egypt would the living sleep among their ancestors.

Mayhap they entered one of these mausoleums? one of his fedayeen murmured, making the sign of the horns to ward off evil.

They are no longer your concern, a voice behind them said.

Gamal and his two companions whirled, curved blades hissing from sheaths at their waists.  A solitary figure stood at the mouth of the alleya tall man, scarred of face and clad in a ragged white turban and a green khalat.  The hilt of a knife jutted from the sash about his lean waist, and to this Gamals eyes were drawn.

It was an Afghan salawar, long and straight, its ivory pommel carved with the leering face of a djinni.

Gamals breath caught in his throat.

The Emir of the Knife.

Assads nostrils flared.  He could smell it: cold, palpable fear, seeping from the pores of the three men he confronted in that blind alley.  But more than fear, the unmistakable scent of hashish permeated their clothing, and this, as much as their uniform appearance and Syrian accents, confirmed his suspicions about the identity of Alamuts unseen enemy in Cairo.

Where is he?  Assad stalked toward them.

The man with the infected eye raised his hands, a gesture of capitulation.  What?  N-No, effendi.  We . . . We are merely lost.  Can you

Where is your master, dog of Massaif?

The fellow paused, and then gave a short bark of laughter.  I see your reputation is well-founded.  He hawked and spat on the cobblestones at his feet.  My master?  My master is making an end of your precious Gazelle just as we will make an end of you, swine!  With a flick of his chin he set his companions into motion; both fedayeen crouched and edged sidewise, their knives low and ready.

Their fear redoubled as Assads hand fell upon the hilt of his salawar, loosening it in its sheath.  Venomous hatred coiled like a living thing through his body; muscles ridged and corded, straining against the onslaught of emotion.  He seized on to this feral rage, embraced it; he kindled it into a savage light that blazed in the depths of his dark eyes.  And how is your master called?

That, the fellow replied, pausing, is no longer your concern!

The pause was the signal for the fedayeen to make their move.  They attacked in unison, fast and well-rehearsed from long association; curved daggers flickered as they surged in from left and right.  While a lesser man, a man not versed in Massaifs tactics, would doubtless have fallen prey to their concerted assault, this time they faced the Emir of the Knife.  He read their intent before ever they took a step.

Assad surprised them by darting right; with tigerish grace, he ducked the clumsy blow of a fedayeen dagger and swept his own blade from its sheath.  Watered steel flashed and glittered.  The Syrians outraged bellow turned to a wet choking scream as Assads salawar ripped him from hip to sternum.  The man reeled away, trailing blood and viscera.

Assad wheeled and twisted; the momentum of his attack kept his blade aloft as the second fedayeen lunged, teeth bared in a grimace of hate.  His dagger sliced empty air, and before he could recover his balance Assad delivered a devastating riposte.  He hammered his crimson-spattered steel into the Syrians neck with murderous fury.

He struck the ground a corpse, head half-severed.

Assad straightened, his reddened blade leveled at the final Syrian, the captain of Massaif called Gamal, as though daring him to move.  Once more, dog, Assad growled.  How is your master called?

Gamal did not answer; his face paled, and sweat beaded his brow.  Still, he dropped to a crouch, the grip on his dagger shifting as he edged away from Assad.  His infected eye was nearly swollen shut; the other had a martyrs gleam.  He would take his secrets to the grave, one way or another . . .

Seeing his foes resolve, Assad gave a low laughmerciless and as hard as stone.  An instant later he sprang; Gamal had no time to react as Assads salawar snapped out with uncanny precision.  The Syrians dagger clattered to the cobblestones and with it four of his fingers, amputated at the knuckles.

Gamal screamed and clutched the mangled hand to his breast, his eyes wide with terror.  Assad had seen such looks before.  Something passed between blade and victim; something that wormed into his body and stripped away the last vestiges of his courage.  Unmanned, Gamal tumbled to his knees.  The Emir of the Knife towered over him, his salawar inches from his face and dripping blood.

Will you make me ask you a third time?