Warrior Cats - History of the Clans

Warrior Cats - History of the Clans 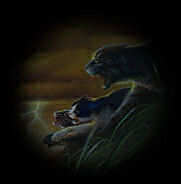 Many moons ago, the forest was a wilderness, untamed by territories. In the north lay sweeping moorland; in the south was dense woodland. On the edge of the trees, a tumbling river flowed out of a dark ravine.

Cats came into the forest. They were drawn by the soft rustlings of small creatures, shadows under water, and the sudden commotion of birds' wings in the trees. These were not warrior cats.

They lived in small groups, not yet Clans. There were no borders set down. And they fought constantly, fearful that prey might run out and that their overlapping territories were being threatened. It was a lawless, bloody time for the forest, and many cats died.

One night, when the moon was full, the cats agreed to meet at a clearing in the forest surrounded by four great oak trees. They argued over stolen prey. Claws flashed; challenging yowls rang across the forest. A terrible battle followed, and soon the ground was wet with spilled blood.

Many cats died that night. Exhausted by their wounds, the survivors slept where they had fought. When they woke they were bathed in moonlight. All around them they saw the spirits of their slain kin, no longer torn and bloodied but shining like fallen stars. They huddled on the ground, and, as the spirits spoke, they saw terrible visions of the future. They saw the forest drowned in blood, their kin stalked by death at every pawstep. And they knew that the fighting had to end.
"Unite or die," said the spirits.

From among the living cats, a black female was the first to speak. She rose from the ground on stiff, battle-wearied legs."My name is Shadow," she mewed. "How should we unite, unless we have a leader? I can hunt in the depths of the darkest night. Let shadow rule the forest!"

"And you would lead us into darkness too!" meowed a silvery gray tom with green eyes. "I am River! I move through the forest along secret paths and hidden places. It is River, not Shadow, who should unite the forest!"

"The forest is more then River and Shadow," growled a wiry brown female. "Wind alone reaches its distant corners. I am as fast as the wind that blows from the high moors. I should be the ruler."

The largest surviving cat was called Thunder. He was a fiery orange tom with amber eyes and large white paws. "What good is any of that compared to my strength and skill at hunting? If any was born to rule, it is I."

A furious yowling broke out under the four great oaks, watched in silence by the spirit-cats. Dark clouds suddenly blew across the moon, and the living cats trembled in fear. On the top of a high rock, they saw a tabby cat, one of the fallen, her fur shining though there was no light in the sky. Her eyes flashed angrily at the cats on the ground.
"You are all as foolish as ducks!" she meowed. "Can't you think beyond yourselves for one moment? Think of your kits!"

The four cats--Shadow, River, Wind, and Thunder--looked up at the tabby, but none of them spoke.

"The forest is big enough to feed all your families and many more," she meowed. "You must find other cats like you, choose a home in the forest, and set down borders."
At that moment, the moon broke free of the clouds, revealing a circle of starlit spirit-cats around the edge of the clearing. A white tom stepped forward, "If you do this," he meowed, "we will reward you with eight more lives, so that you may lead your Clans for many moons to come."

Next to speak was a slender tortoiseshell. She stepped forward and stood beside the white tom. "We will visit you in your dreams and guide you on your journeys."
"Once a month,"meowed the white tom,"at the full moon, you will gather together here, between the four great oak trees, for night truce. You will see us above you in Silverpelt and know we are watching. And if blood is spilled on those nights, you will know we are angry."

"You will be warriors!" yowled the tabby from the high rock. Thunder, River, Wind and Shadow bowed their heads.

"From now on, you will live by a warrior code. Your hearts will be filled with courage and nobility, and if you must fight, it will be not for greed, but for honor and justice."

There was a long silence. Finally Thunder nodded his broad orange head, "This is wise advise. I believe we can choose our territories and lay down borders fairly, in peace."

One by one, the other cats murmured their agreement. Then they returned to their homes and sought out cats like themselves, with similar strengths and abilities. River found cats willing to fish for their prey. Shadow gathered nighttime hunters with clever minds and sharp claws. Thunder found hunters who could track prey through the thickest undergrowth. To Wind came the fastest runners and cats who loved the open moors. Then they divided the forest so each Clan had enough prey to survive, and all the cats could live in safety. And when the leaders returned to the four great oaks for the first night of the full-moon truce, their starry ancestors gave them eight more lives, as they had promised.

There was not always peace between the Clans, but that was to be expected--cats are born with claws and teeth for a reason. Still, as long as they lived by the warrior code, their fallen ancestors would watch over them and guide them through their lives.
And so the age of the warrior Clans began.