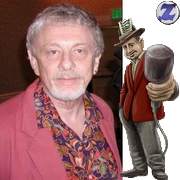 Norman Spinrad, born in 1940, is one of those who founded and established the 'New Wave' of SF 'in the U.S. He is one of the science-fiction authors who take action their novels. In Germany he became famous for his novel "The Iron Dream" (dt: "Der stählerne Traum") who was placed on the German index of writings harmful to young people. " This is one of the issues we talked about...

Zauberspiegel: What does SF mean to Norman Spinrad? How do you see the genre and its future?
Norman Spinrad: The quick answer is anything published as SF.  The serious answer is that the fantasy incorporated into SF is the fiction of the impossible, and the science fiction is the fiction of the possible though not necessarily probable.  I detest the whole concept of genre, and I believe it is dying out, slain by tv, movies, video games, delivering its formulaic content better, easier, and more vividly

Zauberspiegel: What brought you to SF?
Norman Spinrad:  I was home from school sick for several days and someone gave me a pile of sf magzines to read.

Zauberspiegel: You have announced a new project on Facebook. What will it be and where will it be published?
Norman Spinrad: Its called POLICE STATE, its set in New Orleans in the near future, and its about a leftist takeover... by the police.  It will first be published in France by Fayard, but since I havent finished writing it yet, theres no publication date.  Probably Spring of 2012.

Zauberspiegel: »The Iron Dream« (dt: »Der stählerne Traum«) and »Pictures at 11« (dt. »Bilder um 11«) both have references to Germany or to the recent German history. What prompted you to address these issues?
Norman Spinrad: I never believed the simple poltical or economic theories about how something like the Third Reich could take over a country like Germany.  And I had a conversation with Michael Moorcock about how to write formula heroic fantasy, in which he said something like just pick a myth, or a historical template, and crank a lot of Freudian and phallic imagery through it.  And it clicked, I saw the psychological relationship between Nazi imagery and psychosexual neurosis and space opera of the period.  Hitler, after all, was a big fan of Wagnerian opera.
Pictures at 11, or anyway the German aspect, came out of something my friend, the Ossie novelist Karl-Heinz Steinmuller said to me in relation to THE IRON DREAM: why dont you write something about the German reunification.  I had been in Leipzig during the reunification process, and visted Karl Marx University, and thats how an unemployable Ossie history professor with a degree from there became the Green Army Commando leader, and  I was also in East Berlin during part of it, and shown a building taken over by certain groups, which appeared to me as seeming like a hiring hall for unemployed terrorists.

Zauberspiegel: Will there be further works related to Germany?
Norman Spinrad: Who knows? I seldom think more than one book ahead.

Zauberspiegel: »The Iron Dream« had been indexed as publications harmful to young persons in Germany for 25 years as a »glorification of National Socialist ideas«. How does an author handle with this?
Norman Spinrad: Heyne Verlag was very supportive during 8 years of legal battles.  And in the end, we did win.  And aside from the German court case, the novel, which was published in a dozen or more countries and extensively reviewed, was almost never misunderstood.

Zauberspiegel: Did you understand the subtlety of the German organisation for youth protection, breaking the whole book into parts, separate the preface, the (modified) biography of Hitler and the epilogue of the (fictional) historian and to claim the middle section as a piece of fascist propaganda?
Norman Spinrad: Yes, if you want to call it subtle.  I read almost all of the court cases material  (in German, in which I am not all that fluent)and it seemed to boil down to: We understand that this is an anti-Nazi novel, but people who are stupider than we are, particularly young people, might not.
Besides which, the novel was not intended as Youth Literature.  LORD OF THE SWASTIKA, the internal novel written by Hitler was indeed a piece of Nazi propaganda in a way, or a satire of it.  The French novelist Roland Wagner wrote a very interesting forward to one of the French editions.  He came from a Pied Noir background, and when he read the novel as a young teenager, it turned his political consciousness around in a postive anti-fascist direction.  Exactly what I intended the novel to do for young people!

Zauberspiegel: The style in »The Iron Dream« is damn bad, just like the style of writing of  Hitler in »Mein Kampf«. How much time did you need to learn to write so badly? Did you use/read in »Mein Kampf« for research and study purposes concerning the style of writing?
Norman Spinrad: Yes, I might be the last person to have read MEIN KAMPF all the way through.  I also found a little known book that Hitler had written about foreign policy and plowed through it too.  But the most useful book was HITLERS DINNER CONVERSATIONS.  For several years, Martin Bormann sat in the corner taking down shorthand records of everything that Hitler said over dinner.  Hitler in his own natural voice.

Zauberspiegel: Your writing did not only cause attention in Germany. You did stir up Britain up to the House of Commons with »Bug Jack Barron« (dt: »Champion Jack Barron«). In addition to sex, drugs, politics and media is about struggle of power between two men. Wasn't the world ready for such a novel?
Norman Spinrad: The world was indeed ready for such a novel.  It made my reputation, it was translated world-wide, and its still in print in several languages.  And it helped break science fiction out of the kind of literature for youth stereotyping that created a kind of commercial censorship, and not only in Germany.

Zauberspiegel: What would one have to write about in today's media age in order to produce a similar uproar in the House of Commons or a country? Are there any taboos remaining that still can be broken?
Norman Spinrad: No taboos seem to remain unbroken.  But PICTURES AT 11 is a kind of JACK BARRON up to date.  And, well, I suppose GREENHOUSE SUMMER, in which both Communism and Capitalism have fallen and been replaced by something like Syndicalist Anarchism might have run into taboos if Communism had been the dominant economic model of that future.

Zauberspiegel: Yet the highly original style of the »Bug Jack Barron« is distinguished by other facts as well.  Reading is an adventure when thoughts seemingly unfiltered, without punctuation demand the reader. If one also looks a the fact that your style of writing in »The Iron Dream« is willingly bad, the question arises: What style of writing would Norman Spinrad have, if it's only him, Spinrad?
Norman Spinrad: I dont think of style that way.  There is no Spinrad style.  I believe that literary style is the only means of conveying the consciousness style of the characters, and so the prose style should vary with the consciousness of the characters, the ambiance of the setting, and so forth.  Sometimes I call this Method Writing, like Stanislavsky Method  Acting.  I try to become the viewpoint character in each scene when Im writing it, telling the story from the inside.

Zauberspiegel: In your novels and stories you always position yourself, get involved for civil rights. After the attacks of 11 September 2001 civil rights in the U.S. were sacrificed on the altar of national security. There was a similar situation in the course of the Baader-Meinhof-Gang aka Red Army Faction (RAF) in the seventies in Germany. Is this a pattern of action for a democracy? Is freedom always buggerred for the benefit of national security?
Will you incorporate the development in the U.S. in a novel and how you see the development in the U.S.? Where is the journey of the last remaining superpower aiming to?
Norman Spinrad: I was well aware of the tactics of the Baader-Meinhof Gang in trying to provoke the German government into being represive enought generate revolution against it.  It didnt work, but it wouldnt surprise me to learn that Osama bin Laden was consciously trying to do the same thing.  Indeed after 9/11, he said that he would destroy American democracy.  In effect creating the Great Satan.
There is always an internal tension in a democracy forced to defend its democratic principles against an enemy out to destroy them without violating them itself.  See A WORLD BETWEEN, which is centrally about this paradox.
And a novel that I havent been able to get published in the US that was just published in France is OUSSAMA in French and OSAMA THE GUN in English.  A kind of sympathy for the jihadhist devil--now theres a taboo that at least American publishers are scared shitless of violating!

Zauberspiegel: Isn't »1984« far too innocent nowadays and should be replaced by a 1984 of the 21st century?
Norman Spinrad: A lot of novels like that are being written.  But an sf writer should never, ever, put a specific date in a story of the relatively near future, let alone the title!

Zauberspiegel: Thanks a lot for the interview.
Norman Spinrad: Excellent thoughtful questions.