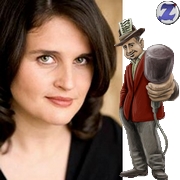 Doing reseaches in the internet I came by the novel „The Gospel of Blood“ and the website of its author, Rebecca Cantrell. My contact with her resulted in the following interview I don’t want to keep you back from …We did the interview in a very interesting manner: I wrote my questions to Rebecca in German since she speaks German, she answered in English, since she feels more comfortable doing so. 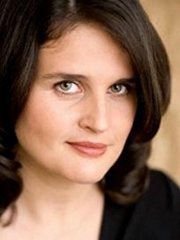 Zauberspiegel: Rebecca, you spent quite a while in Berlin in the 1980’s. How did this happen?
Rebecca Cantrell: I was an exchange student with the Congress Bundestag program representing the state of Alaska.
I lived in the former West Germany for a semester in a little town called Herdecke, then in Berlin for a semester. I came back for a second year in Berlin and graduated from the John F Kennedy Schule.

Zauberspiegel: A while later you studied in Berlin and Göttingen. What fields of study did you engage in?
Rebecca Cantrell: Political Science and German literature.

Zauberspiegel: I have read that you decided to quit your job as an editorial journalist or consultant and moved to Hawaii afterwards to write your novel debut there. Is that right?
Rebecca Cantrell: Yes, although I did work as a consultant again later.

Zauberspiegel: Your debut novel „A TRACE OF SMOKE" was published in 2009. What is this book about?
Rebecca Cantrell: A TRACE OF SMOKE follows a crime reporter (Hannah Vogel) as she searches for her brother’s killer through the streets of 1931 Berlin.

Zauberspiegel: As a nonspecialist, what is the process like? How did this cooperation with the publishing company Forge occur? Did you take the „classical“ approach and send your novel to the publishing house?
Rebecca Cantrell: I queried agents at the Maui Writers Conference, signed with Kimberley Cameron and Associates and my agent, Elizabeth Evans, sent the book out to various publishers. It took Forge nine months before they said yes.

Zauberspiegel: Where did the inspiration for the book come from?
Rebecca Cantrell: When I lived in Berlin in the 1980s I took a trip to Dachau and saw a faded pink triangle on the wall.
I had a gay host brother and I realized that he would have been sent there if he’d lived 50 years earlier. That led to research on the topic and eventually to a book set in the gay milieu of Weimer-era Berlin.

Zauberspiegel: Did you envision your protagonist to be a female crime reporter from the beginning?
Rebecca Cantrell: At first I thought of making her a policeman, but I changed her to the victim’s sister because I wanted her to be more emotionally connected to the murder victim.

Zauberspiegel: Why did you choose the 1930’s and Berlin as time and placec of the novel? Do you have a particular liking for the Weimar era?
Rebecca Cantrell: It was a fascinating time—so much light and life and energy and decadence that was soon to be destroyed.

Zauberspiegel: How would you describe the protagonist Hannah Vogel?
Rebecca Cantrell: She’s compassionate and intelligent and does the best she can to protect those she loves. She works hard to tell the stories that others turn away from.

Zauberspiegel: How do your novels about Hannah Vogel differ from the usual novels of this genre?
Rebecca Cantrell: That’s a tough question. I worked to give it a palpable sense of place and time, and I hope that research comes through. Also, a strong heroine living by her wits and her humor.

Zauberspiegel: The so far last novel with Hannah Vogel "A City of Broken Glass" was published in 2012. Does this mark the end of the series or will there be more adventures with the reporter?
Rebecca Cantrell: After some editorial issues, there will be a new Hannah Vogel book coming out soon. I don’t have a release date, but I do know that there will be one.

Zauberspiegel: What is the history of your cooperation with the James Rollins and the Erin-Granger-trilogy, consisting of its three books „The Blood Gospel“, „Innocent Blood“ and „Blood Infernal“?
Rebecca Cantrell: I met him at the Maui Writers Conference just after A Trace of Smoke was accepted for publication. He was teaching a class on thrillers that I attended and he kindly agreed to write a blurb for my book.
We stayed in touch after that and he contacted me when he wanted to work on a vampire book.

Zauberspiegel: What is this trilogy about?
Rebecca Cantrell: An archaeologist, Dr. Erin Granger, is drawn into a mysterious quest to save the world from evil supernatural forces.

Zauberspiegel: In "The Blood Gospel“ vampires have a major part. What are the beings and adversaries Erin Granger has to deal with in the two follow ups „Innocent Blood“ and „Blood Infernal“?
Rebecca Cantrell: All kinds! Rollins and I  had great fun coming up with them—vampires called strigoi, animals cursed by strigoi blood, vampires able to control their bloodlust by drinking the blood of Christ, a child with angelic blood, and more!

Zauberspiegel: How does such a cooperation between two authors work when writing a trilogy together? Do you rotate while working on a novel, do you take turns writing chapters or particular parts of a book?
Rebecca Cantrell: We outlined together, write various scenes, and edited them together. We’d meet on Mondays via Skype to go over pages—he was either in California and Nevada, I was in either Hawaii or Berlin.

Zauberspiegel: Let’s talk about "Joe Tesla". Your second novel series is about the adventures of the software multi millionaire Tesla, who lives in the the tunnels of New York City because of his agoraphobia. How did that idea turn up?
Rebecca Cantrell: When I lived in Berlin I became fascinated by the u-bahn and the in-between spaces we travel through every day. What if my in-between world was someone else’s everyday world?
I wrote a version where Joe lives in Berlin under Potsdamer Platz that’s been translated into German. And there’s an American version where he lives in New York.
(Die Welt unter Berlin )

Zauberspiegel: Is the protagonist of the series in any way related to Nikola Tesla?
Rebecca Cantrell: He believe that he is Nikola Tesla’s great-grandnephew.

Zauberspiegel: The first Tesla-novel "The World Beneath" was published 2013 as ebook and won the "International Thriller Writers Award". What is this novel about?
Rebecca Cantrell: Joe Tesla is stricken with agoraphobia and cannot go outside. He ends up living in the subway tunnels under New York city. He occupies a house built in a manmade cave under Grand Central Terminal with his psychiatric service dog. One day when they’re out walking the tunnels, they come across a man breaking into Franklin Delano’s presidential train car (which really does exist and is rusting away in a tunnel under New York) and discover a mystery that has its roots in a disease created during World War II.

Zauberspiegel: Following "The Tesla Legacy" (2015) and "The Chemistry of Death", the fourth Tesla-novel "The Steel Shark" was published in 2017. Can you tell our readers a bit about the content of this book?
Rebecca Cantrell: In THE STEEL SHARK, Joe Tesla has discovered that he can go underwater as well as underground and he becomes embroiled in a plot to wreak great damage with a hijacked submarine.

Zauberspiegel: What exactly is the Joe-Tesla-series? Would you say it is a series on crime, thriller or mystery? Or something completely different?
Rebecca Cantrell: A Thriller series.

Zauberspiegel: Do you plan further novels with Joe Tesla?
Rebecca Cantrell: Yes. Joe and his trust dog, Edison, have more adventures ahead.

Zauberspiegel: In 2015  "A is for Actress" was published, the first novel oft he Sofia-Salgado-series. What is it about?
Rebecca Cantrell: This one is a light comedy series. Sofia Salgado is a former child star who used to play a detective on TV and now wants to be one in real life.

Zauberspiegel: You are writing this series together with Sean Black. How did this cooperation develop?
Rebecca Cantrell: I met Sean in New York when our first books came out and we stayed in touch over the years. We started kicking ideas about this crazy private investigator character back and forth and there you go.

Zauberspiegel: Who came up with the idea of this book series? You or Sean Black?
Rebecca Cantrell: Sean Black.

Zauberspiegel: 2016 "D is for Drunk" was published as the fourth novel of the series. Do you plan to continue the series till the letter "Z"?
Rebecca Cantrell: I’m hoping we will make it to Z! E is for Exposed came out this year and will be followed by F is for Fred in a few months. Then G is for Groovy also this year.

Zauberspiegel: I have read you also write screenplays. Among them "The Humanitarian", "A Taste for Blood" and " iDrakula", whom you submitted at the Shriekfest. What are these Screenplays about?
Rebecca Cantrell: Oddly enough, they are all vampire movies. The Humanitarian and A Taste for Blood are two versions of the story of a vampire who lives in Hawaii and fights to change his fate. iDrakula is based on a novel I wrote under the pen name Bekka Black.
It was the first cell phone novel in the US and is also an iPhone app. It’s a retelling of Bram Stoker’s Dracula using only things you can find on a phone—text messages, email, web searches, and voice mails.
The script also incorporates the moviegoers‘ phones into the viewing experience. The second in the series is iFrankenstein, where a homeschooled teenager creates a power-hungry

Zauberspiegel: "The Humanitarian", "A Taste for Blood" und " iDrakula" made it to the finals of “Shriekfest: The Los Angeles Horror/Sci-fi Film Festival". What exactly is this Shriekfest?
Rebecca Cantrell: It’s a horror movie festival that runs for a weekend every year in Los Angeles and a weekend in Florida that showcases independent horror movies and screenplays.

Zauberspiegel: In an interview you mentioned literary examples such as Stephen King, Shirley Jackson, Anne Rice, Michael Crichton und Lee Child. How did the works of these authors influence your novels respectively the subjects of your novels?
Rebecca Cantrell: I read a great deal and always have. I love the sense of dread that Shirley Jackson engenders. Stephen King’s horror and fear. Anne Rice’s Gothic beauty intertwined with horror. Michael Crichton’s fantastic scientific plots. Lee Child’s pacing. And the wonderful style and language of each of them.

Zauberspiegel: The first book your read in German was the "Die unendliche Geschichte" by Michael Ende. What did you find so intriguing about this book?
Rebecca Cantrell: The sense of rhythm and the fantasical nature of it. The world of Bastian and the world of the Nichts. I loved how the chapters were printed in alternating red and green. And the lush use of language meant that I had a much better vocabulary ever week!

Zauberspiegel: What are the book projects you are writing on right now? Can you tell us something about it?
Rebecca Cantrell: I’m working on this secret science fiction screenplay and F is for Fred with Sofia Salgado, some short stories, and getting ready to research the next Hannah Vogel mystery when I’m in Berlin this summer.

Zauberspiegel: Rebecca, thank you very much for answering our questions.
Rebecca Cantrell: Thank you